The Montlake Project will improve transportation for both motorized and nonmotorized travel along the corridor with a new SR 520 eastbound bridge over Union Bay. This project also builds a new, three-acre lid covering the highway in Montlake that will include regional transit stops and open green space. East of the lid, a bicycle and pedestrian bridge will be constructed over SR 520.

All current closure information be found on the SR 520 Construction Corner webpage.

Go to travel cameras
Go to traffic alerts in this area 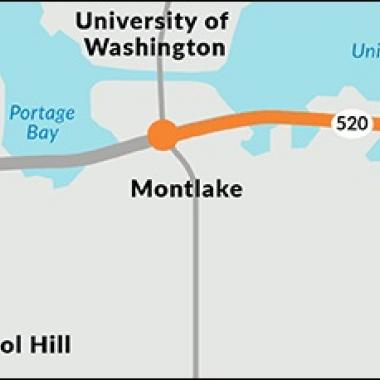 The old SR 520 west approach bridge, built in the early 1960s, served as a vital link across Union Bay. It connected the highway between Montlake and the floating bridge. Built on hollow columns, the old bridge was vulnerable to earthquakes, and the highway’s location divided the Montlake community. The new eastbound bridge, parallel to the westbound bridge that opened in 2017, will provide safer and more reliable travel. This project will also reconnect the Montlake community with a landscaped lid over the highway.

The Montlake Project is a key piece of the SR 520 Bridge Replacement and HOV Program. It’s the first phase of the “Rest of the West” – the final improvements to the SR 520 corridor in Seattle. The SR 520 Program’s Final Environmental Impact Statement included these projects in its analysis. WSDOT refined the project’s final design through a community engagement process with local government partners, design professionals and community members. This resulted in significant design changes, including redesigning the lid to emphasize better travel connections and more usable open space. It also led to the inclusion of a bicycle and pedestrian bridge east of the lid. You can read more on the SR 520 Program Community Engagement tab.

SR 520’s 1960s-era west approach bridge, supported by hollow columns, was at risk of failure in a severe earthquake. In addition, the highway’s old four-lane segment in Seattle is typically at capacity during peak periods. This project provides a number of benefits:

This project is a central part of the larger, ongoing megaprogram that is reconstructing the SR 520 corridor from I-405 in Bellevue to I-5 in Seattle. We’ve completed several phases of the larger SR 520 Bridge Replacement and HOV Program, including:

A commitment to equitable contracting

WSDOT is committed to providing equitable contracting opportunities to minority-owned, women-owned, veteran-owned and disadvantaged small businesses (MSVWBEs). Our goal is to provide 26 percent of our transportation projects’ contract value to these firms. See our equal opportunity in contracting webpage for more information and resources for working with WSDOT.

The SR 520 Montlake Project expects to have additional business opportunities for qualified firms owned by minorities, women or veterans. Subcontractors interested in working with Graham, the prime contractor for the Montlake Project, should contact:

WSDOT, Graham and subcontractors American Bridge and Elcon held an online meeting on Sept. 28, 2020. This meeting was with minority-, woman- and veteran-owned businesses to discuss upcoming contracting opportunities on the SR 520 Montlake Project. If you missed the meeting, you can view the presentation (PDF 1.1MB) to see the information we shared. You also can read this Q&A (PDF 196KB) posed by meeting participants. 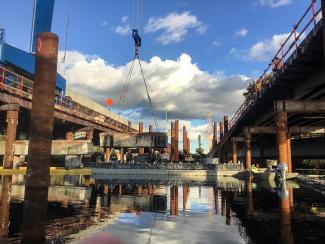 Crews from American Bridge, a subcontractor to Graham, remove pieces of the old eastbound bridge on Lake Washington.

WSDOT implemented a Community Workforce Agreement (CWA) for this project. The CWA provides a variety of benefits to WSDOT, its contractors and the skilled construction workers building the project. The agreement also aligns WSDOT with other public agencies in the region that use similar labor agreements on their projects. Learn more by reading our SR 520 CWA folio (PDF 2MB) or view the SR 520 CWA document (PDF 5MB) for additional details.

Promoting apprenticeships on the Montlake Project

WSDOT's SR 520 Montlake Project includes a 20% apprenticeship utilization requirement for each craft. Of that amount, aspirational goals are set at 21% for minority apprentices and 12% for women apprentices.

The Montlake Project contractor, Graham, was given notice to proceed with construction in November 2018, with project completion estimated for approximately 2023. As of February 2021, Graham achieved 15% apprenticeship utilization. Through a WSDOT-sanctioned, preferred-entry program that provides apprenticeship or pre-apprenticeship training, Graham works with unions and other community partners to engage apprentices. 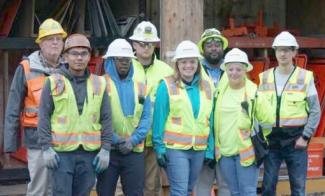 You can reach Brittany Grenard, Graham’s HR apprenticeship coordinator, at Brittany.Grenard@graham.ca or 425-620-6038.

This project is part of the $2 billion in SR 520 improvements from Lake Washington to I-5 – the “Rest of the West.” These improvements are funded by the 2015 Connecting Washington and 2022 Move Ahead Washington transportation legislation packages. 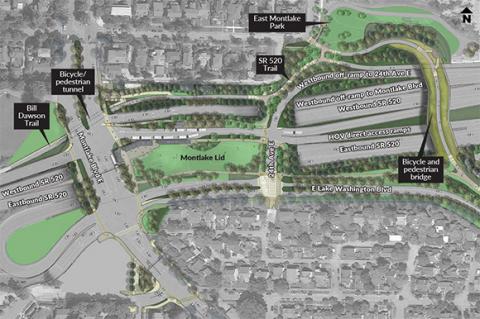 The future Montlake lid over SR 520, looking west, with 24th Avenue East in the foreground and Montlake Boulevard in the distance. 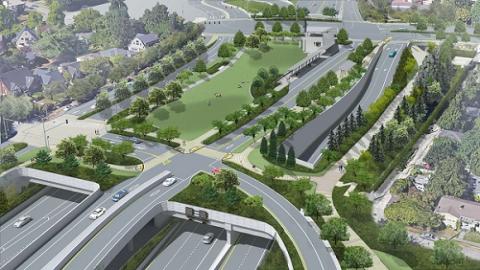 Our next monthly meeting will be held online at 12:30 p.m. on Wednesday, Feb. 15. Register here. At the meeting, you'll learn more about upcoming construction and ask questions of the project team. Missed our last monthly meeting? You can view the presentation online (PDF 4.9MB).