Learn about ramp meters and how they work. 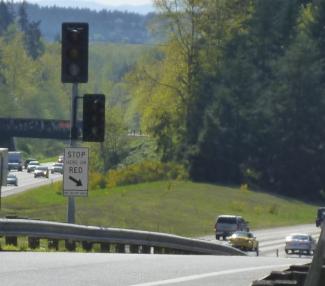 Ramp meters are a specific type of traffic signal used to control how quickly vehicles enter traffic flow on a freeway, and are a freeway operation strategy designed to reduce collisions and decrease travel times. Ramp meters function by controlling the rate (metering) at which vehicles enter the freeway.  Reducing the rate of vehicles entering the freeway helps to reduce congestion by not allowing as many cars into the same space at the same time, and can help to reduce merging issues that occur when a large number of vehicles try to merge into a lane that is already mostly full. 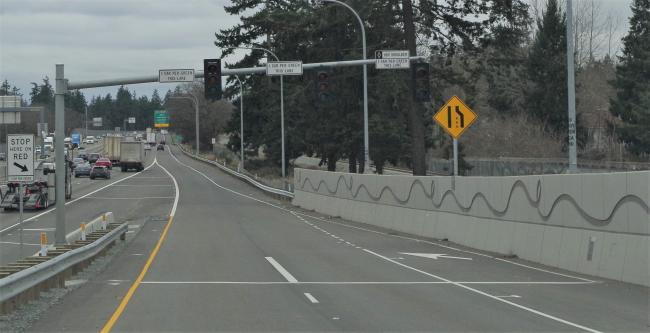 How to use a ramp meter

Ramp meters work similar to conventional traffic signals.  Each driver pulls up to the white stop line, and the signal will change to green when determined appropriate by the operations software.  Most ramp meters are designed for one car to proceed on each green light, and will have a sign that reads "one car per green this lane" or "one car per green each lane", but some ramp meter systems are set up for more than one vehicle per green.  Where more than one vehicle may proceed on each green light, the signing will list the allowed number of vehicles. 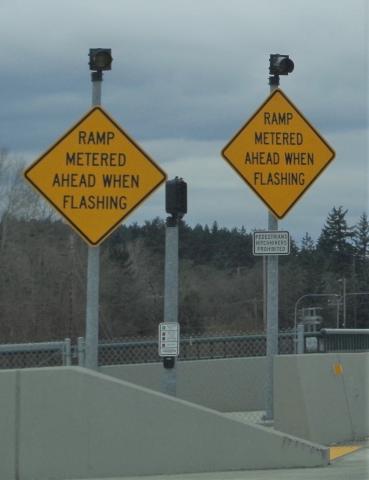 Why don't you see the yellow lights on at a ramp meter?  You might, if you time it right.  We only use the yellow signal displays when the ramp meter first goes into operation after being turned on.  This is to allow drivers who encounter the meter when it first turns on time to adjust and not have to slam on the brakes to stop for the red display.  Once the meter has stopped traffic, the switching rate between red and green is too fast and the traffic can already see the red and the advance warning signs with beacons, so the yellow display is skipped.  Some other states don't even include a yellow display.

Ramp meters use computer algorithms that take in large amounts of traffic data, which is then analyzed to determine the most effective rate of allowing more vehicles onto the freeway within certain maximum and minimum limits.

We use traffic data collection devices, such as inductive loops and side-fired radar, to collect traffic speeds and volumes on freeway lanes and ramps. The responsible Traffic Management Center gets this data. The computer system analyzes the data and automatically adjusts the ramp meter signal timing rate to maximize traffic flow on both the freeway and the ramps.

When heavy traffic uses an on-ramp without a ramp meter, multiple vehicles try to merge at the same time. Drivers on the freeway now have to adjust to multiple vehicles, rather than just one at a time. When drivers try to accommodate multiple vehicles entering the freeway by slowing down, they slow everyone else behind them down, quickly growing into a backup and congestion. Freeway drivers may also slow down too much or too fast or be uncertain what to do, which could result in a collision.

When an on-ramp is metered, only one vehicle is trying to merge, which is more comfortable for drivers on the freeway to accommodate. It reduces how often and how much drivers slow down for the merging traffic—resulting in fewer disruptions to freeway traffic, including slowdowns and collisions. A short wait on the ramp helps keep average freeway speeds higher, helping reduce travel times overall.

Ramp meters typically operate during peak congestion times: 6 AM to 9 AM, and 3 PM to 7 PM. Meters may still be operated outside these hours, as their operation depends on freeway traffic speeds and volumes, and not on time of day.