Learn about diverging diamond interchanges, a proven way to move more people and reduce the potential for collisions.

The basics of a diverging diamond interchange (DDI)

The first DDI in the United States was built in 2009 in Springfield, Missouri (Interstate 44 / State Route 13 Interchange). Since then, over 150 of these types of interchanges are now open to traffic throughout the United States, with another 80 under construction.

The first DDI in Washington State was built at the Interstate 5 and State Route 510 (Marvin Rd) interchange in Lacey, WA. Below are two examples of diverging diamond interchanges. 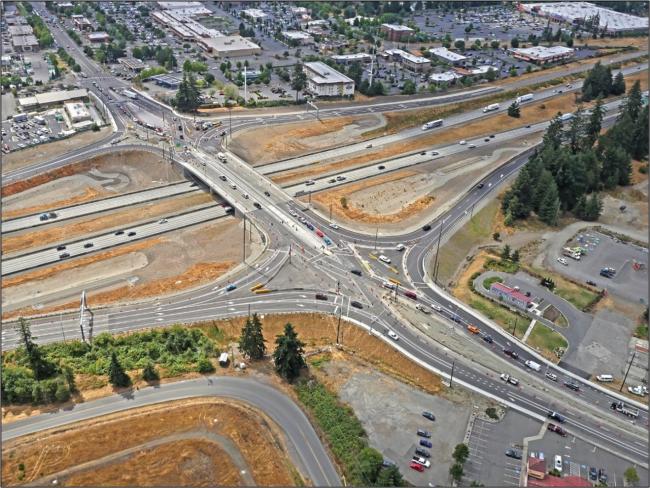 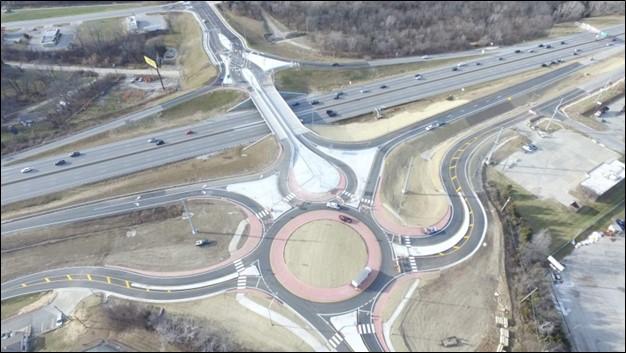 A DDI is a grade separated interchange design where the street traffic crosses to the other side of the roadway between freeway ramps. The crossing allows for vehicles to turn left on and off freeway ramps more efficiently (without stopping if signaled or stop controlled) or crossing opposing lanes of traffic. Right turns on and off the freeway ramps occur either before or after the crossover intersection, when traffic is on the normal side of the roadway. Crossover points are often signalized but can also be controlled with roundabouts too. Interchanges can be designed as an overpass or underpass of a freeway depending on site characteristics. To see how a DDI works visit WSDOT’s YouTube channel and watch the video created for the Interstate 5 and Marvin Rd DDI. 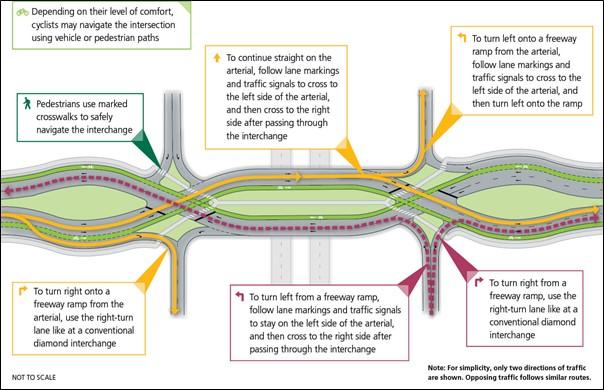 A DDI is actually very intuitive for travelers passing through it, but at first glance - and as viewed from above - it can appear very complicated. There really isn't anything new to learn, and striping, signing, and signal displays are very effective in routing drivers through the interchange. The lanes funnel drivers where they need to go, and there is only one route to take through the traffic signals with well marked and easy to follow entry and exit points. Some on and off-ramp turns use yield control, which is no different than making the same type of turn at a conventional intersection. Opposing lanes of traffic in the center portion of the interchange (crossing the freeway) are separated by concrete barriers or similar tall obstructions such that drivers can't really tell they're on what looks like the "wrong" side of the road when viewed from above. The WSDOT YouTube channel has a video showing how drivers navigate a DDI.

Pedestrians are typically provided a route through the center of the roadway between the two intersections, with a wide pathway protected by concrete barrier. Bicyclists may use a provided bicycle lane, ride with motor vehicle traffic, or use the pedestrian pathway (please be courteous to pedestrians).

When to consider a DDI

DDIs are generally considered when:

Experience shows that if roundabout ramp terminals work from a capacity and design standpoint, they are a better option due to being more efficient and sustainable than the a more expensive DDI. DDIs are reserved for those circumstances where either the volume of left turns are too high or where the dominant flows through the intersection create inequities in flow for a significant portion of the day through a roundabout.

An Intersection Control Evaluation (ICE; see WSDOT Design Manual Chapter 1300) is used to investigate and identify the optimal geometric and intersection control strategy for an intersection based on site context and traffic conditions.

As of October 2021, there is one completed DDI and two in the planning stages on the state highway system: