Reducing the risk of wildlife collisions

We gather information from three sources to ensure we have as complete a collision inventory as possible.

Local and State Patrol officers submit to us when there’s a human injury or fatality, or property damage exceeding $1,000. On average, we receive 1,500 reports each year, with 167 human injuries and one human fatality. However, based on the number of deer and elk carcasses removed from state highways by WSDOT maintenance staff and citizens, we know that the number of collisions is much higher.

Carcass removal by our maintenance staff

Since July 1, 2016, it’s been legal for citizens to salvage road-killed deer and elk, provided they obtain an online permit within 24 hours of removing the animal. We obtains these records periodically from the Washington Department of Fish and Wildlife. In the first year of legal salvage, citizens reported the removal of 652 deer and 127 elk from Washington highways.

By combining this data we get a good sense of where collisions are occurring. We use that information to develop proposals to reduce or eliminate the problem.

Concern about collisions with wildlife

We work to reduce the severity and frequency of collisions on state highways to the extent that is reasonable. We strive to identify locations with high wildlife/vehicle collision rates. These locations may indicate areas where highways cross significant wildlife-use areas, such as deer or elk wintering areas or migration routes. We consider these areas when managing the highway system. Collisions with wildlife can also reduce wildlife populations, of special concern for rare or sensitive species.

Because of property damage and human injury, most reported wildlife/vehicle collisions are with deer and elk. Each year there are a few collisions with other large mammals such as moose, bighorn sheep, cougar and black bear.

Reducing the risk of collisions with wandering animals on highways

WSDOT uses tactics such as wildlife fencing, crossings, and median barriers to encourage animals to stay off highways.

Habitat connectivity is how well animals can move across landscape. Busy roads can create barriers to animal movements. They need to move from place to place for food, protective cover and in response to seasonal conditions.

Most animals can cross a road with low traffic volumes without a problem. However, these roads tend to be in rural areas where more animals live. This means animals cross more often which results in more vehicle collisions than on roads with high traffic. As traffic volume goes up, a vehicle is more likely to hit and kill an animal trying to cross. Eventually, animals mainly avoid a busy road and become isolated from animals on the other side of the road.

To encourage animals to stay off highways, we use specialized fencing, crossings, and median barriers. We monitor some culverts and bridges to determine the effectiveness and understand how animals use these structures. View this video to see a variety of animals using these structures.

How we help protect wildlife

We worked with the Washington Department of Fish and Wildlife and other stakeholders on a statewide habitat connectivity assessment that identified areas where wildlife require movement across highways.

In addition to this planning work, WSDOT is incorporating wildlife protection measures in its projects. One example is the Interstate 90 Hyak to Easton project, which is under construction and includes a number of wildlife crossing structures as well as wildlife fencing.

Other examples around the state include:

An effective method for reducing the risk of wildlife collisions is to use 8-foot high wildlife fencing to prevent animals from entering the highway. WSDOT has installed wildlife fencing in a few key areas, such as along Interstate 90 east of Cle Elum and U.S. 97 alternate route north of Wenatchee. However, fencing is expensive to install and maintain and cannot be used everywhere. Providing safe crossing opportunities like bridges or large culverts can also reduce the number of animals crossing on the pavement, thereby reducing the potential for collisions.

We use fences to keep large animals off the highways. Studies show they reduce collisions between vehicles and large animals (mainly elk, deer, and moose) by 80 to 99 percent.

Gaps in fencing at intersecting side roads and on- and off-ramps are places where animals can gain access to the highway. To prevent deer and elk from entering the highway, we commonly use “wildlife guards” at these locations.

While fences keep animals off highways, they also serve as barriers to important resources for the survival and successful procreation. Combining fences with crossing structures either over or under the highway surface provide opportunities for animals to move past highways safely.

WSDOT designed a path under the new Casey Ponds bridge on US 12 to provide safe passage for small animals under the busy highway. Grading and planting produced a more naturalistic setting. The safe passage opportunity at Casey Ponds will improve as plants grow and increase cover around the bridge.

WSDOT replaced the fish passage barrier on US 97, north of Goldendale, with a structure large enough to accommodate both the stream and a variety of animals. This project has significantly reduced the number of deer-vehicle collisions in one of the state’s worst problem spots. Correcting fish passage barriers, like the one featured in these before and after photos, is also an opportunity to provide better conditions for all wildlife to pass safely under highways.

We have evaluated a number of different technologies for reducing road kill. These included deer reflectors, a laser detection system and signs. Signs are the most commonly used tool to warn motorists of the possibility of wildlife on the highway. WSDOT installs signs in areas with documented high numbers of deer or elk/vehicle collisions. Flashing signs, or signs with regularly updated messages, are more likely to be noticed and they tend to reduce deer or elk/vehicle collisions more effectively than regular signs. Unfortunately, most of these have not proven to be effective. The only method still in use is the animal activated warning signs used to notify motorists when the elk are near U.S. 101 in Sequim.

In place since 2000, this system relies on radio telemetry collars placed on elk to trigger a flashing elk crossing sign. While the system has reduced the number of elk/vehicle collisions, it has several drawbacks including the need to place radio collars on the elk, and false warnings triggered when the elk are near the receiver, but not necessarily crossing the road.

Median barriers are vital to preventing head on collisions. On highways with lower traffic volumes, wildlife benefit from highway designs that allow easy crossings. We use median barriers designed with a cutout in the base to allow small animals to get past them easily. The cable barrier is another good option we use to allow the safe crossing of animals, as they can see past the barrier and are more likely to go around the cables.

Removing dead animals from the highway

Our maintenance crews remove animal carcasses that are a potential hazard or distraction from state highways. In many areas, this work occurs exclusively on weekdays.

In most areas, we bury carcasses at designated disposal sites, often borrow pits. Citizens may salvage freshly killed animals, this practice becoming legal in most areas of the state on July 1, 2016. In a few areas of the state, where abundant road kill is a chronic problem, we take the carcasses to a permitted composting facility.

This database stores data about wildlife carcasses (primarily deer and elk) removed from state highways by WSDOT maintenance crews and by citizens under the deer and elk salvage law. These data help with project planning and identifying wildlife collision problem areas.

Federal law protects transportation agencies from liability associated with the collection of data needed to improve the safety of highways. This includes wildlife collision data. Requestors of carcass removal data will be asked to review information on the legal issues and limitations of these data prior to having their request filled. 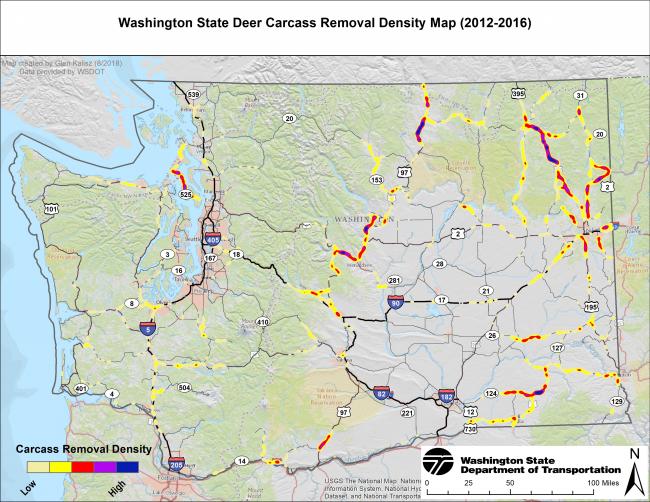 See An Analysis of Deer- and Elk-Vehicle Collision Sites along State Highways in Washington State for an example of research using carcass removal data.

The carcass removal data are not a complete record of collisions.