Learn about the policies that govern the use of high occupancy vehicle (HOV) lanes, the State Route 167 High Occupancy Toll (HOT) lanes and the I-405 Express Toll Lanes.

In urban areas the demand for highway travel is greater than roads can accommodate, and traffic breaks down when the number of vehicles on the road exceeds capacity. HOV, HOT lanes and express toll lanes are strategies to maximize the movement of people on existing roadways by managing the number of vehicles in the lane to stay below capacity, providing more reliable speeds and increasing the advantage of using transit and high occupancy vehicles.

We are continually looking into ways to maximize efficiency to help keep people moving on our highways. HOV, HOT lanes and express toll lanes are part of a comprehensive approach to managing transportation systems efficiently.

Who can use an HOV, HOT lanes and express toll lanes

We create HOV lane policy based on federal and state law, as well direction from the Legislature to establish how and when drivers can use the lanes.

Express toll lanes and HOT lanes are special types of HOV lanes which allow drivers to pay a toll to use the lanes when they don’t meet the carpool requirements.

Under certain circumstances some drivers can travel toll-free in the express toll lanes or HOT lanes.

To be eligible for a toll-exempt trip in the express toll lanes or HOT lanes, the vehicle must have the correct number of occupants and be equipped with the appropriate Good To Go! pass. Learn more on the Good To Go! tolling program page. 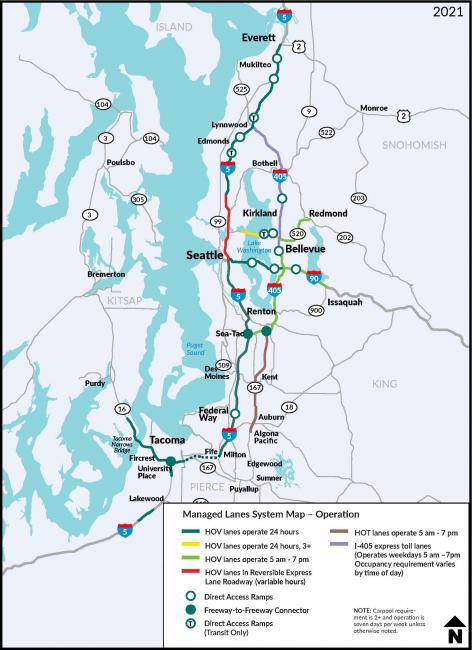 HOV lanes, HOT lanes, and express toll lanes are less effective if ineligible vehicles use them. The Washington State Patrol enforces the lanes for compliance. Violating HOV rules can be expensive and becomes increasingly more expensive with repeated violations. For a first violation the fine is $186, and all subsequent violations within a two-year period increase to $336. If a doll or dummy is placed in the car, an additional $200 will be added to the fine.

We established performance standards in the 1990s to ensure the state's freeway HOV system helps provide reliable travel time and dependability for transit users, vanpoolers and carpoolers. A driver in an HOV lane should be able to maintain an average speed of 45 mph or greater at least 90 percent of the time during the morning and afternoon rush hour. This standard has since been endorsed in state and federal legislation.

For many years most Puget Sound HOV lanes have not met this performance standard. On I-405 and State Route 167, we introduced express toll lanes and HOT lanes, which charge drivers a toll rate that varies depending on traffic conditions to use the lanes. By introducing a dynamic toll, we now have additional tools to help manage congestion.