The 21-mile segment of SR 9 typifies a historic highway in Washington: a relatively narrow, two-lane roadway with narrow or no shoulders, with occasional widening, restricted sight distance, limited clear zones, railroad and rural road at-grade crossings and frequent reduced speed limits due to curves, some 90 degrees. Because it has retained its overall integrity of location, feel, workmanship as seen in its dimensions and road prism and its association with early highway development in Washington, the segment is NPRH eligible per Criteria A and C.

In February 1885, county commissioners funded a survey of a road to connect Bellingham and the South Fork Nooksack River country via Lake Whatcom. That year settlers cut a crude road up the valley, at least a portion of which was a puncheon roadbed of split cedar planks. That forerunner of SR 9 was “nearly obliterated” in places by construction of the Seattle, Lake Shore and Eastern Railroad between Seattle and Sumas in 1891. Nevertheless, by the mid-1890s Whatcom County was crowned “the banner good roads county of the state,” due largely to the $187,337 investment made in its roadways. By 1914, a road ran north-south through the South Fork Nooksack River Valley on the route of the present SR 9. The road ran north to the section line between Sections 8 and 17, T38N, R5E, where it intersected an east-west running road. One-quarter mile to the east in the community of Van Zandt, a road on the present SR 9 alignment ran north, eventually crossing the North Fork Nooksack River. The roads remained in that configuration through the late 1920s. By 1935, a more direct route had been constructed avoiding the quarter-mile jog, connecting the southern and northern legs via the two 90- degree corners at the railroad crossing in Van Zandt. By then the highway was known as the “Deming to Wickersham Road,” referring to the communities to the north and south of Van Zandt. That road was administratively combined in 1937 when the Washington Legislature designated a continuous route from Woodinville in King County to Blaine in Whatcom County as Secondary State Highway 1A (SSH 1A). Highway renumbering changed SSH 1A to State Route 9 in 1964.

The segment is defined by more or less continuous integrity, primarily in its lane and shoulder widths. Beginning in Skagit County near the highway’s intersection with Bassett Road north of Sedro-Woolley at MP 58.4, the segment continues north to the SR 9 Junction with SR 542 at MP 79.4 in Whatcom County. Rural agricultural landscape predominates throughout the segment’s route, with occasional views of snow-capped peaks of the North Cascades to the east. Historic-era houses, barns and other farm buildings are visible in open cultivated fields and pasture lands. There are places where the highway parallels and crosses the railroad built in 1891. Shoulders widen where the highway passes through the communities of Wickersham, Acme, Clipper and Van Zandt. Noncontributing elements in the segment include shoulder widenings and pullouts, improved road and driveway intersections and rail crossings and modern guardrails and bridges, including that over the South Fork Nooksack River #9/305 (built in 1987).

The segment includes the North Fork Nooksack River Bridge #9/315, a 410-foot long, modified Warren through truss with verticals and parabolic top chords on its two 160-foot spans. The bridge carries two lanes of SR 9 and a 3-foot wide concrete sidewalk on its 26-foot wide deck. Designed in 1953 by the Washington State Department of Highways under Bridge Engineer George Stevens, the riveted steel bridge was built in 1954. Other than installation of steel thrie beam barriers over original horizontal steel tube and vertical post guardrails, the bridge retains all aspects of its integrity. 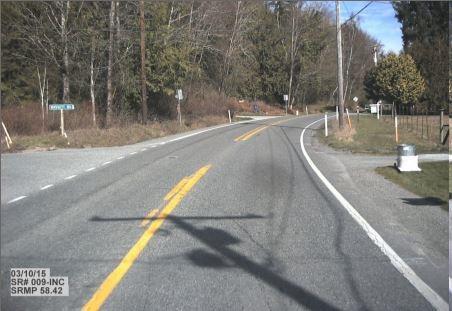 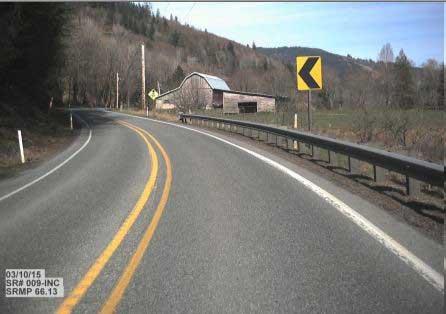 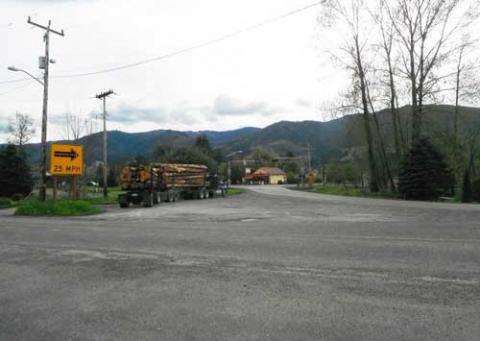 Railroad crossing of the historic SR 9 segment at curves in Van Zandt, MP 77.38. 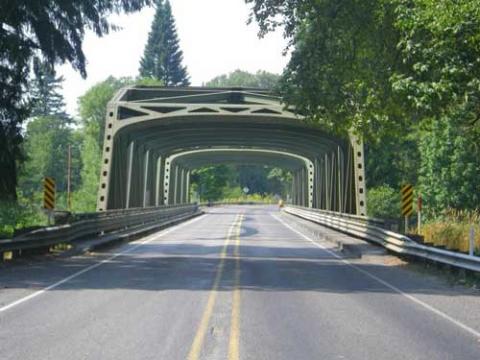 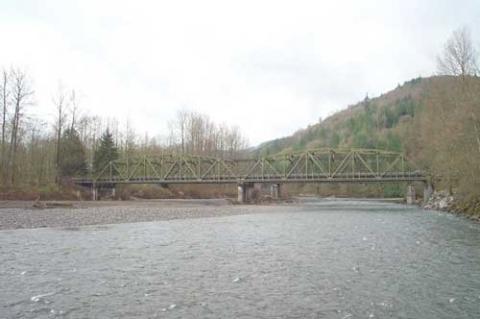 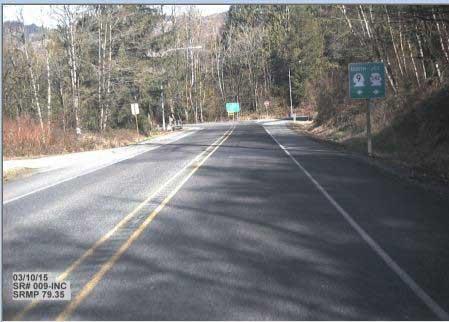 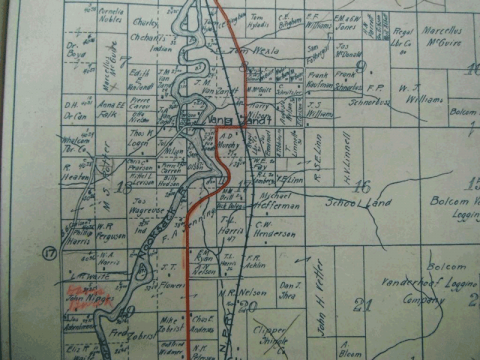 Kroll’s 1914 map showing the predecessor road to SR 9 prior to its realignment south of Van Zandt.