Learn about the federal court injunction for fish passage on this page and view photos & videos of our completed projects.

We have been working for many years to remove fish passage barriers. Since 2013, we have concentrated most of our fish passage work in Western Washington because of a federal culvert injunction. Twenty-one northwest Washington tribes asked the U.S. District Court to find that the State of Washington has a treaty-based duty to preserve fish runs. They wanted the state to repair or replace culverts that impede salmon migration.

The right of taking fish is secured to tribes in the Stevens Treaties. Therefore, the court ruled in the tribes’ favor, requiring the state to refrain from building or operating culverts under state-maintained roads that hinder fish passage. Issued in March 2013, the permanent injunction requires the state to significantly increase the effort for removing state-owned culverts that block habitat for salmon and steelhead by 2030. 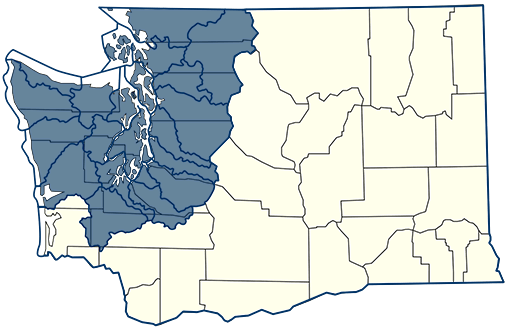 Complying with the permanent injunction

As of June 2022, WSDOT has corrected 100 injunction barrier culverts and improved access to 474 miles of blocked salmon and steelhead habitat within the injunction area. While funding for stand-alone fish passage projects is increasing, additional future funding is needed to comply with the 2030 deadline of the permanent culvert injunction. We continue to look for efficiencies across the program while considering challenges in workforce and materials shortages.

Other larger highway projects will correct barriers that are within the boundaries of those projects too. Learn more about our plans to design and construct projects on our Project delivery plan webpage.

Barriers owned by others also exist in the system. It will take a coordinated approach to fully open watersheds for salmon and steelhead habitat. For this reason, we work with owners of nearby barriers to coordinate barrier corrections when feasible. Partnerships such as this are key to the success of our Fish Passage program. Learn more about past partnerships and future opportunities at our Partnership webpage.

View more before & after photos of our correction sites on our Fish Passage Flickr page.

How we know it's working

We monitor the barrier correction post-project to verify structures are fish passable and function as designed. The Department of Fish & Wildlife conducts surveys upstream to look for adult salmon and steelhead use. They have found fish spawning upstream at over half of our fish passage projects constructed in recent years. In some cases, it may take years before fish use the new habitat, particularly if the fish numbers are low or other barriers exist in the system. See our latest Fish Passage Annual Report (PDF 8.8MB).

Watch our An up-close look at Minter Creek YouTube video, to learn more about the design and construction considerations that often lead to project-specific approaches and efficiencies. This video highlights a barrier correction project on Minter Creek and Little Minter Creek, located along State Route 302 in Pierce County near Purdy, WA.

Watch another YouTube video featuring a fish passage project at Siebert and Bagley Creeks along US 101 near Port Angeles. This exciting project improved access to large amounts of fish habitat.