Have an idea for this employee newsletter? Email WSFEmployeeComms@wsdot.wa.gov.

This action is part of the Move Ahead Washington funding bill passed earlier this year and applies to all our youth walk-on and youth vehicle passengers.

Named “Free Youth Transit Pass” to be consistent with our partner transit agencies throughout the region, there are some nuances that will be fully outlined in a Quick Notice in the coming weeks.

The law providing free fares applies only to youth riding as a passenger in a vehicle or walking on a ferry. We will also eliminate the surcharge for youth riding a bicycle.

A youth aged 16 through 18 driving a vehicle onto a ferry will not qualify for the free fare and will have to pay the combined adult-driver fare.

Free youth fare tickets will not be available at our kiosks or online. All walk-on tickets will need to be purchased from a ticket seller. Youth with a valid ORCA card may go directly to the turnstile and tap their card to pass.

All free youth fare tickets will expire after two hours to help reduce the risk of fraud.

Questions? Reach out to your supervisor, a terminal manager, port captain or simply send an email to WSFEmployeeComms@wsdot.wa.gov.

The Federal Highway Administration recently announced that we’ll be receiving $38 million as part of its Ferry Boat Program. That’s an increase of $21 million from what we’ve received in recent years as a result of the Infrastructure Investment and Jobs Act. We’ll be working with the governor’s Office of Financial Management and the state legislature to determine how to use this funding.

We were also awarded with a $5.1 million grant from FHWA to plan and design a terminal wait time system. The goal is to determine what technology and infrastructure are needed to improve the efficiency of our terminal operations and reduce wait time for our customers in vehicles.

And lastly, we were just awarded $3.5 million from the Federal Emergency Management Agency to enhance vessel security.

Our grants team continues to scour the nation looking for potential sources of funding to meet our needs.

It’s not as visible to us or the public as our vessels and terminals, but our warehouse is just as vital in keeping our routes operating every day. Almost everything that’s needed to run our ferry system is processed at the facility before going out to various locations.

Those deliveries are Truckdriver Lead Nick Wakeman’s expertise. On any given day, you’ll find him loading up a truck and driving out to our vessels, terminals, Eagle Harbor Maintenance Facility, 2901 and many of the region’s commercial shipyards.

So what’s inside the truck? Nick says it could be anything from cleaning supplies to spare parts. Many times, it’s something that repair crews need to get a ferry or terminal back up and running again. But aside from these emergency runs, most of his deliveries follow a set schedule that ensures all our facilities don’t run out of the supplies they need.

Nick has been with us for nearly 13 years and currently fills in as the warehouse foreperson at times and is the shop steward for the Teamsters union. He says his job is great because he loves the Pacific Northwest and is paid to drives around the region every day. But the most rewarding part of the job for him is the people he works with.

“Just the people that have come and gone in the warehouse, the people I’ve gained my experience from, the past drivers, the past storekeepers – just everyone – we have a great relationship here,” said Nick. “We’re almost like a little family.”

When he’s not working, Nick likes to go hiking, camping and paddleboarding. But he said most importantly, it’s spending time with his family. His wife Laina is his high school sweetheart and together they have two daughters, Ayla and Aubrey.

View a video profile of Nick.

Here are some numbers that recap what we did in August:

Why are our ferries green and white? It’s because of long-running tradition

Ever wonder why our ferries are green and white? Well, it’s actually a long-running tradition that goes back to the very beginning of the state ferry system.

When Washington State Ferries purchased most of the Puget Sound Navigation Company (Black Ball Line) in 1951, something was needed to distinguish the new publicly owned ferry system from the well-known black and white vessels.

The Kalakala, Rhododendron, Illahee and their sister ships received green stripes, marking them for the Evergreen State and starting the tradition for the green and white ferry fleet.

Now more than 70 years later we’re still using green and white, distinguishing our ferries across the Salish Sea in sunshine, rain, snow and fog, as evergreen as the tradition itself.

From Our Social Media Feeds 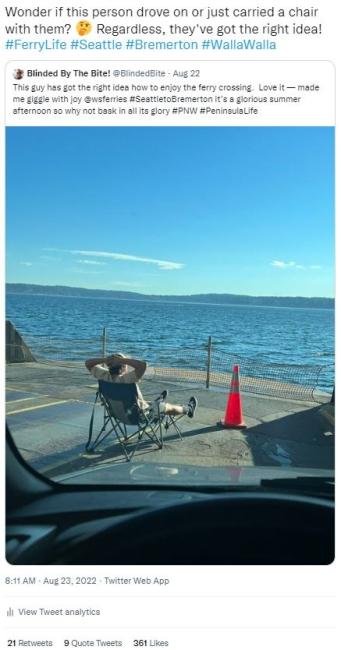 What’s Up at WSDOT?

Secretary Roger Millar announced in July that he and fellow leadership team members wanted to meet with employees from around the agency.

The goal was to gather input on what can be done to enhance the employee work experience and help everyone succeed in their jobs.

In late August and early September, Roger spent four days visiting Washington State Ferries vessels, terminals and various facilities to meet with our employees. A member of our executive team joined him each day.

On the first day, Roger was out on our Port Townsend/Coupeville and Mukilteo/Clinton routes.

He spent the second day on our Anacortes/San Juan Islands run.

Roger visited our Edmonds/Kingston, Bainbridge and Bremerton routes on the third day, as well as our Eagle Harbor Maintenance Facility.

On the final day, he stopped at our Fauntleroy/Vashon/Southworth and Point Defiance/Tahlequah runs, as well as our warehouse in Seattle’s Georgetown neighborhood.

Thank you to all the employees who participated in these important conversations with Roger and our executive team members. 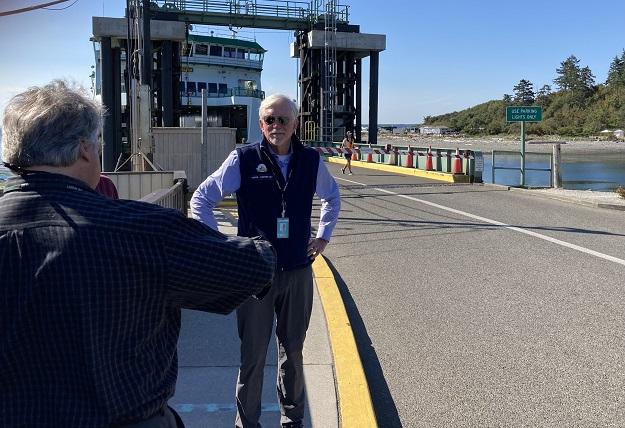 Employees in the news in August:

Have an idea for this employee newsletter? Email WSFEmployeeComms@wsdot.wa.gov.