Learn about Active Traffic and Demand Management (ATDM), an operational strategy for reducing collisions associated with congestion and blocked lanes.

Around 25 percent of traffic congestion is due to incidents such as collisions or disable vehicles. To alleviate this, we launched an Active Traffic and Demand Management (ATDM) system on August 10, 2010. WSDOT was one of the first state transportation agencies to use this type of ATDM system in the United States.

By providing real-time advanced notice of traffic conditions ahead, drivers are alerted earlier and can respond sooner, reducing the need for last second avoidance maneuvers or panic braking - both of which are primary factors that contribute to collisions.

Here are some of the basic symbols normally used with the ATDM overhead lane signs:

HOV lanes may use additional symbols to show the status of the HOV lane:

When traffic is flowing normally, the overhead signs are blank and the standard 60 MPH speed limit is displayed on the large signs on each side of the highway.

When traffic begins to slow down, the overhead signs will turn on with reduced speed limits. These are to prepare drivers for the slower traffic ahead, reducing sudden braking and collisions. The larger signs provide more detailed information, such as why traffic is slowing, how far ahead, and if any lanes are blocked.

If a lane is closed ahead, advance signs will display open lanes and lanes that drivers need to exit.

Starting closer to where the lane closure is in effect, the overhead signs will show which lanes are closed. These will normally start before the actual incident site, in an effort to ensure vehicles are out of the closed lane(s) well before they reach anyone or anything in the closed lane(s).

Emergency responders have reported high compliance with "lane blocked" and "lane closed" symbols. The lane control symbols have been helpful in getting traffic out of closed lanes well in advance of where emergency responders may be working or parked in the roadway. Washington State Patrol troopers patrolling the corridor have reported feeling safer when working on the roadway in an ATDM corridor.

The system is also helpful managing traffic during other emergent situations, such as severe weather. For example, during the week of January 16, 2012, we were able to use the ATDM system to provide advance warning of a major snow event forecast for Western Washington. When the snow started to fall, the system was used to reduced speed limits for the worsening road conditions, similar to how the systems in Snoqualmie and Stevens Passes are operated, with much success.

The following corridors either have ATDM installed, or are in the process of having ATDM installed. Additional corridors are evaluated periodically as potential candidates for new or expanded systems. 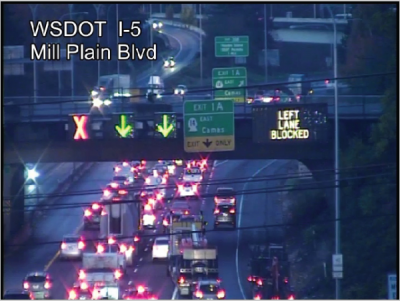 The newest ATDM system in the state, this corridor is southbound only from the vicinity of NE 78th St to the Columbia River Bridge. This system is designed to address ongoing increased congestion, particularly during typical morning commutes, in an effort to improve safety and reduce travel times. The drawbridge on the Columbia River aggravates the need for advance warning of slow or stopped traffic heading south to Portland, Oregon. 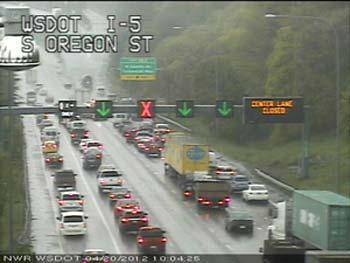 The first modern ATDM system in the state, this corridor is northbound only from the vicinity of Boeing Access Road to Interstate 90. Activated August 10, 2010, this system consists of traffic sensors, cameras, and 97 electronic signs. 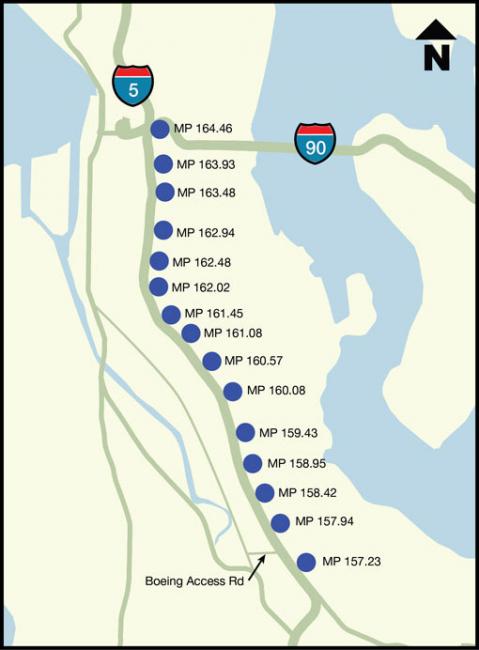 This seven mile corridor was selected because it had experienced a significant number of collisions that resulted in or contributed to congestion. There combination of lane reductions, on-ramps, and off-ramps in the area also result in significant numbers of lane changes and speed variations. With the Alaskan Way Viaduct replacement project expected to increase these problems, the replacement project funded the installation of this ATDM system. This system cost approximately $23 million.

This corridor includes both directions of Interstate 90, from Interstate 5 in Seattle to the vicinity of 150th Ave SE in Bellevue. This corridor was activate in two segments: areas west of W Mercer Way in June 2011, and the remainder in May 2012. 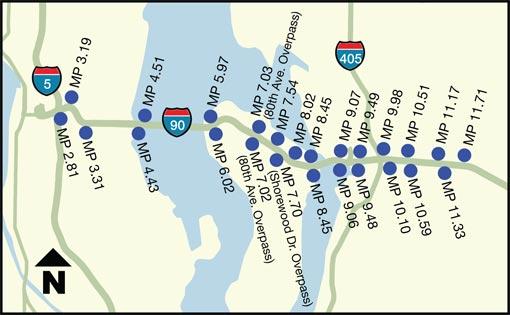 Collision history identified this corridor as a candidate for ATDM. Roughly 60% of the collisions on this corridor are congestion related. With the added pressure of both the Highway 520 bridge replacement project and the Sound Transit light rail expansion replacing the I-90 express lanes, the decision was made to install the ATDM system. Installation on I-90, and the initial installation on Highway 520, cost approximately $42 million, and was funded by the Federal Highway Administration Urban Partnership Agreement grant program.

The oldest ATDM system in the state, we have been using variable message signs to display variable speed limits across Snoqualmie Pass for years. These signs display both speed limits and road conditions on a single large sign, rather than multiple signs like the urban ATDM systems. Smaller signs were later added which display the temperature. 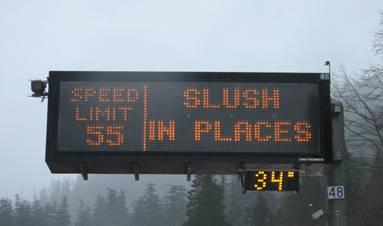 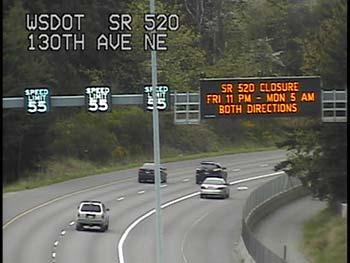 This corridor includes both directions of Highway 520, from Interstate 5 in Seattle to the vicinity of 124th Ave NE in Bellevue. Originally activated in November 2010, this was our second ATDM system in the Puget Sound region. Signs are being adjusted and added as part of the series of improvement projects from Interstate 5 to Interstate 405. 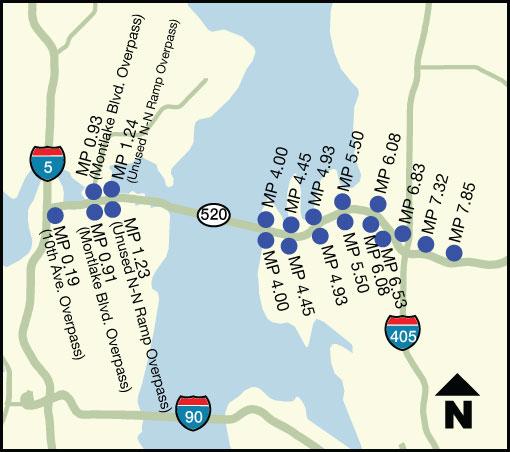