The 12.5 mile segment of SR 112 (formerly Neah Bay Road and Secondary State Highway 9A) extends from the Makah Indian Reservation (Mile Post 0.00) to the Hoko-Ozette Road Junction (MP 12.50). It was determined eligible for inclusion in the National Register of Historic Places under Criterion C, as it is representative of early twentieth century highway engineering, design and construction methods in Washington state. The segment is largely intact and retains most of its character-defining features. The road also possesses many of the aspects of integrity needed for NRHP eligibility, including location, setting and design. It has maintained its original alignment, as well as profile and prism dimensions of 10-foot lanes and 2-foot shoulders specified in original engineering drawings. In the few places where the roadway varies from its original dimensions, those sections are considered non-contributing. The sloping and embankments appear unaltered, as does the grading. Slight modifications to the segment’s surface have diminished its integrity of materials only slightly. Perhaps most noticeable is the limited sight distance and lack of clear zones throughout the segment’s right-of-way. Those aspects preserve its integrity of feeling, giving drivers the experience of traveling on a truly historic roadway along the craggy shore of the Olympia Peninsula’s Strait of Juan de Fuca.

In 1929, a 12.5-mile section of dirt roadway was added to Clallam County Road 9A from the junction of the Hoko-Ozette Road to the Makah Indian Reservation. The state purchased the right-of-way from Sekiu to Neah Bay in 1947. An 8.8-mile stretch of the highway was paved in 1948. The roadway from Sekiu to Neah Bay was incorporated into the SSH 9A route in 1955. The route designation of Secondary State Highway 9A was changed to State Route 112 in 1963.

The segment of SR 112 between the Makah Indian Reservation and Hoko-Ozette Road Junction (beginning at MP 0.00 and ending at MP 12.50) is a two-lane highway compromised of an asphalt surface atop a bed of compacted earth and crushed stone. The segment is characterized by narrow 10-foot lanes, 2-foot shoulders, limited sight distance and minimal clear zone. The road’s alignment and curvilinear design are dictated by the topography of its location, sited between the Strait of Juan de Fuca and a series of imposing escarpments. The highway closely follows the costal topography until MP 10.50 near Kydaka Point where it begins to stray from the coastline. The segment’s prism, the foundation that supports the pavement, and its profile, the road’s cross-section in relation to the surrounding landscape, appear unchanged from original construction. The length of highway visible to the driver, known as sight distance, is significantly impeded by sharp, angular corners, dense foliage, rock outcroppings and cliff faces. These features also affect the road’s clear zones as landforms and vegetation are directly adjacent to the highway’s narrow shoulder. Few pull-offs and road intersections are present throughout the segment. 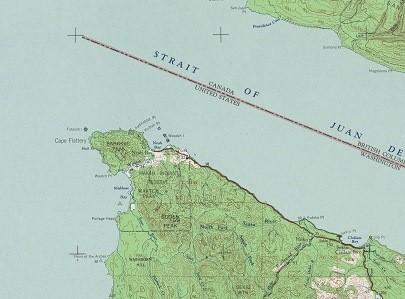 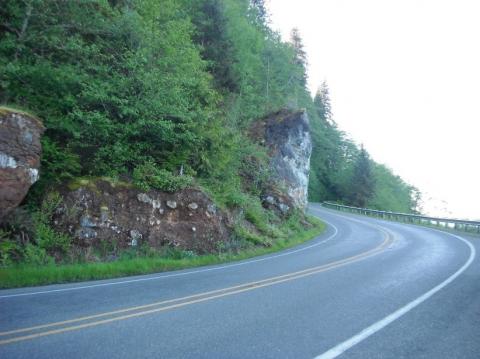