The SR 167 Completion Project in Pierce County is part of the Puget Sound Gateway Program, which also includes the SR 509 Completion Project in King County. Together these projects complete two major unfinished highways in the Puget Sound region to create new connections to Interstate 5, the ports of Tacoma and Seattle and Seattle-Tacoma International Airport. The SR 167 Completion Project constructs 6 new miles of tolled highway between Puyallup and the Port of Tacoma and builds sidewalks and shared-use paths for non-motorized travelers. Completing this unfinished highway will greatly benefit the movement of freight, improve safety and reduce congestion on local roads and highways in the surrounding area.

Construction on Stage 1b began in summer 2022. Throughout construction, drivers on I-5, SR 99, SR 509 and 70th Avenue East can expect roadway and lane closures, rolling slowdowns, traffic shifts, and occasional uneven and rough surfaces.

In February 2023, drivers can expect a traffic shift along northbound and southbound I-5 near Fife toward the outside lanes, so construction crews can begin working in the I-5 median. The traffic shift will also coincide with a speed limit reduction to 50 mph between mileposts 138 and 139 near Fife on northbound and southbound I-5. The speed reduction to 50 mph, from the current 60 mph limit, will enhance driver awareness of construction activity and ensure work-site safety as construction crews shift activity to the I-5 median. The speed reduction is anticipated to last through summer 2023.

Learn more about what you can expect during construction of the SR 167, I-5 to SR 509 New Expressway Project at the project's online open house, available on WSDOT's engage platform now through Feb. 20, 2023. 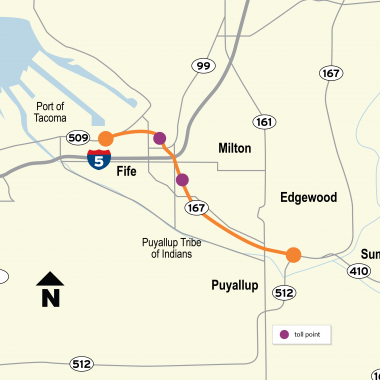 The SR 167 Completion Project will close a crucial gap in the state's highway system by completing the unfinished SR 167 between Puyallup and the Port of Tacoma. The new four-lane highway will be called an expressway and will be electronically tolled (no tollbooths) at 2 toll points - one west of I-5 and the other east of I-5.

Second stage of construction (Stage 1b) - In progress

Construction began in summer 2022.  Named the SR 167/I-5 to SR 509 New Expressway Project, this stage of development includes: 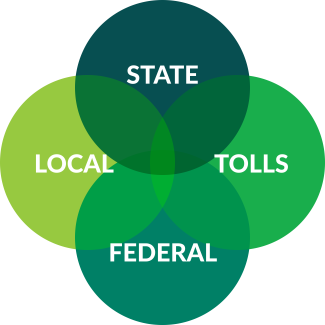 The Puget Sound Gateway Program has approximately $2.38 billion in funding from four sources:

As part of the SR 167/I-5 to SR 509 New Expressway Project (Stage 1b) WSDOT has a unique project that will bring greater environmental benefits than traditional mitigation methods. The Riparian Restoration Program will revitalize approximately 150 acres of wetlands, remove invasive vegetation, plant tens of thousands of native plants and encourage the return of animal life with natural barriers near improved streams. The project re-channels Hylebos Creek away from I-5 which to help improve water quality, restore healthy fish populations and alleviate chronic flooding on I-5.

About the Puget Sound Gateway Program

For project updates, sign up to receive SR 167 project emails.

For all other inquiries:

For information about the SR 167 Completion Project, contact Amy Danberg