This project added bus/carpool lanes in both directions between 108th Avenue Northeast in Bellevue and Lake Washington’s eastern shore. The project also built three landscaped, community-connecting highway lids over the highway, two transit stations in the highway median and the first leg of a regional, cross-lake bike and pedestrian path.

This project is complete and you should not expect any construction-related delays. 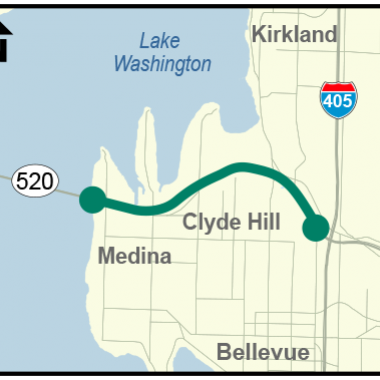 Area map of the SR 520 Eastside Transit and HOV Project

SR 520 is a busy regional corridor that connects Seattle with cities east of Lake Washington, including Bellevue, Kirkland and Redmond. In recent decades, Eastside cities have experienced dramatic population and employment growth, leading to increased traffic and transit demand. This overall rise in congestion – on a roadway designed for the 1960s – led to frustrating commutes and unreliable travel times for transit riders and motorists.

The Eastside Transit and HOV Project was part of the larger, ongoing SR 520 Bridge Replacement and HOV Program. The SR 520 Program is rebuilding SR 520 from I-405 in Bellevue to I-5 in Seattle. Design features for the rebuilt Eastside corridor were refined through various community engagement processes. These processes included local government partners, design professionals and community members. Their input significantly influenced the final design of key project elements. Examples include the Eastside’s three freeway lids, noise walls and the shared-use SR 520 Trail.

You can read SR 520 design reports and summaries of key design processes on the SR 520 Program Community Engagement tab.

Other completed phases of the larger SR 520 Bridge Replacement and HOV Program involved:

When the corridor’s reconstruction finishes in approximately 2030:

The original SR 520 corridor, opened in 1963, had just two lanes in each direction. It also had no shoulders for disabled vehicles, no bus/carpool lanes, and short on-ramps that added risk for merging traffic. In the 1970s, a converted right shoulder became a westbound transit lane between 108th Avenue Northeast and Evergreen Point Road. The region’s growing economy and population, particularly on the Eastside, caused steadily worsening congestion and longer commutes on SR 520. This was especially true during peak travel times.

The reconstructed Eastside segment of SR 520 provides a safer and more reliable travel connection between the Eastside and Seattle. These changes, together with the corridor’s other, ongoing improvements, will enhance travel for motorists and transit riders. A new, wide bike and pedestrian trail alongside the highway also provides a non-motorized travel option for commuting and recreation. The reconstructed Eastside corridor provides numerous additional public benefits, including:

The SR 520 Program has participated in numerous mitigation projects to protect the natural environment of the greater Lake Washington watershed. Learn more about these projects and other environmental benefits on our SR 520 Environment tab.

The SR 520 Eastside Transit and HOV Project was funded by a variety of state and federal sources, including SR 520 tolling that began in December 2011. The final cost of the Eastside project, including preliminary engineering and right of way, was approximately $434 million.