The pontoons constructed for this project now support the new SR 520 Floating Bridge. SR 520 travelers now have a safer, higher-capacity bridge with new, dedicated HOV/transit lanes and a 14-foot-wide bicycle and pedestrian path. 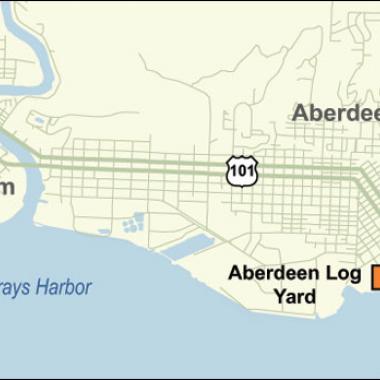 Bridge pontoons are large, watertight concrete structures and the foundation of a floating bridge. Though the pontoons are composed of heavy concrete, science allows the bridge to float! This is because the weight of the water displaced by the pontoons is equal to the bridge’s weight, including traffic.

WSDOT and contractor Kiewit-General built a 4-acre casting-basin facility in Aberdeen to stage construction of pontoons for the new SR 520 floating bridge. The 21 longitudinal pontoons built in Aberdeen – the largest ever built in the state - were joined end-to-end on Lake Washington. Each of these pontoons is 360 feet long, 75 feet wide, nearly 30 feet tall and weighs 11,000 tons.

Crews constructed the Aberdeen-built pontoons in six cycles. Each cycle of pontoons was floated out of the casting basin, inspected, and then towed by tugs into Lake Washington. We built an additional 44, smaller pontoons in Tacoma, Washington, that flank the larger, longitudinal pontoons and add supplemental stability for the new bridge. At the peak of construction, more than 650 workers – steelworkers, carpenters, concrete specialists, welders, crane operators and others – were on the job building pontoons between the two locations.

This project was an important part of the larger, ongoing megaprogram that is reconstructing the SR 520 corridor from I-405 in Bellevue to I-5 in Seattle. Completed phases of the larger SR 520 Bridge Replacement and HOV Program involved:

Tugboats guide a longitudinal pontoon through the Lake Washington Ship Canal and past the
Fremont Bridge en route to Lake Washington for assembly of the new SR 520 floating bridge.

The SR 520 Pontoon Construction Project was funded by a variety of state and federal sources, including SR 520 tolling that began in December 2011. The final cost of this project, including preliminary engineering and right of way, was approximately $515 million.