We replaced the world's longest floating bridge – a four-lane, 1960s-era structure – with a safer, six-lane bridge designed to withstand stronger windstorms and waves. Opened in April 2016, the new bridge also added shoulders for disabled vehicles and a separated, 14-foot-wide path for cyclists and pedestrians.

We opened the West Approach Bridge North in 2017. At the time, it carried three lanes of westbound-only traffic across Union Bay from the new floating bridge to Seattle. To make room to construct a parallel eastbound bridge, we’ve temporarily shifted all traffic over Union Bay. Currently all traffic is on the north bridge, with two lanes in both directions and a 40 mph speed limit.

When a new, three-lane eastbound bridge is completed in 2023-2024, the north bridge will revert to a westbound-only, three-lane span and the speed limit across Union Bay will increase. 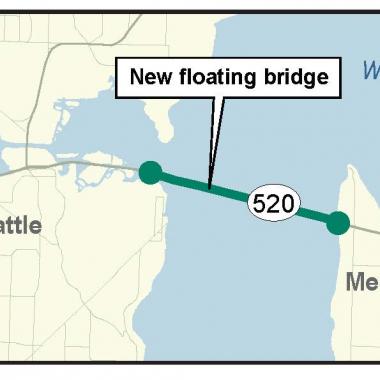 Area map of the completed SR 520 Floating Bridge and Landings Project. The new floating bridge extends from the east shore of Lake Washington, in Medina, to Union Bay, about a mile from the lake's western shore in Seattle.

The new SR 520 floating bridge maintains a vital social and commercial transportation link between Seattle and the growing cities on the east side of Lake Washington. Moreover, the new bridge gives the region a safer and more reliable cross-lake route with new, dedicated lanes for buses and carpools, and a separated path for nonmotorized travel. When the bridge opened in April 2016, Guinness World Records named it the world’s longest floating bridge.

The Floating Bridge and Landings Project was a central part of the larger SR 520 Bridge Replacement and HOV Program. The ongoing SR 520 Program is rebuilding SR 520 from I-405 in Bellevue to I-5 in Seattle. The SR 520 Program’s Final Environmental Impact Statement included the floating bridge project in its analysis. The floating bridge’s design features were refined through various community engagement processes. These processes brought together local government partners, design professionals, and community members, and significantly influenced the project’s final design. One example is the inclusion of viewpoints and marine-themed railings along the SR 520 Trail on the bridge’s north side.

You can read the result of these design processes on the SR 520 Program Community Engagement tab.

Other now-completed phases of the larger SR 520 Bridge Replacement and HOV Program involved:

The old SR 520 floating bridge, opened in 1963, was showing its age. The bridge's pontoons were vulnerable to windstorms and strong waves. The hollow columns supporting the bridge’s east and west approaches were vulnerable to earthquakes. Additionally, the old, routinely congested bridge had only two lanes in each direction, no shoulders, and no bus/carpool lanes.

The SR 520 Program has participated in numerous mitigation projects to protect the natural environment of the greater Lake Washington watershed. Learn more about these projects and other environmental benefits on our SR 520 Environment tab.

Noise from the new bridge

The new SR 520 floating bridge opened to traffic in April 2016. Soon after, some lakeside residents complained about noise from vehicles driving across metal expansion joints. These joints are located on the highway's east and west high-rises. In response, WSDOT committed to working with the community and the expansion joint manufacturer to explore noise-reduction options. WSDOT and a University of Washington engineering team later conducted noise studies on the new bridge. They found that overall noise levels from the new bridge's joints are lower than other bridges in the area. These include the I-90 floating bridge and the Tacoma Narrows Bridge, as well as the old SR 520 bridge. Their conclusion was that the new bridge’s quieter, specially grooved pavement reduces the noise from vehicle tires on the roadway. Quieter pavement, they found, makes the noise from cars running over the new expansion joints seem more pronounced. This happens even though the new joints’ noise level is actually lower than on the old bridge.

The Legislature directed WSDOT and the UW team to field test potential options for reducing the floating bridge’s expansion-joint noise. A final study report, including cost assessments, is due back to the Legislature by Dec. 31, 2022. Separate funding would be required to implement any bridge changes recommended by the new study

The SR 520 Floating Bridge and Landings Project was funded by a variety of state and federal sources. These sources included SR 520 tolling. Tolling began on SR 520 in late 2011 on the old floating bridge and in 2016 on the new bridge. The final cost of the Floating Bridge and Landings Project was approximately $849 million. This figure includes preliminary engineering and right of way.