To make room to construct a parallel eastbound bridge, we've temporarily shifted all traffic over Union Bay. Currently all traffic is on the north bridge, with two lanes and a 40-mph speed limit in both directions. This configuration will last until Montlake Project construction finishes in 2023-2024. At that time, the north bridge will return to a three-lane, westbound-only bridge.

The new eastbound bridge will extend SR 520’s improvements between Montlake Boulevard in Seattle and 108th Avenue Northeast in Bellevue. This includes three lanes in each direction, dedicated HOV/transit lanes and full shoulders. Pedestrians and cyclists can already use the new SR 520 Trail to cross Lake Washington. 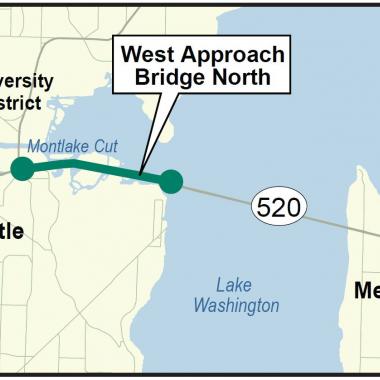 The old SR 520 west approach bridge, built in the early 1960s, served as a vital link between Seattle’s Montlake neighborhood and the SR 520 floating bridge. Built on hollow columns, the old bridge was aging and vulnerable to earthquakes. The new westbound bridge is designed to modern earthquake standards and includes a dedicated HOV/transit lane, providing a safer and more reliable connection.

The West Approach Bridge North Project was the first of the SR 520 Bridge Replacement and HOV Program’s Seattle projects. This project was included in the SR 520 Program’s Final Environmental Impact Statement. We refined the design for the West Approach Bridge North Project as part of various community engagement processes. These processes included local government partners, design professionals and community members. Their input significantly influenced the final design for the project. Examples include adding viewpoints along the SR 520 Trail on the bridge’s north side and aesthetic, fluted support columns. You can read the results of these processes on the SR 520 Program Community Engagement tab.

This project is an important part of the larger, ongoing megaprogram that is reconstructing the SR 520 corridor from I-405 in Bellevue to I-5 in Seattle. Completed phases of the larger SR 520 Bridge Replacement and HOV Program include:

The Montlake Project, currently under construction, is completing the second of two parallel west approach bridges over Union Bay. This project also is building a new landscaped lid between Montlake Boulevard and 24th Avenue East, and a bicycle and pedestrian land bridge to the east of the lid. 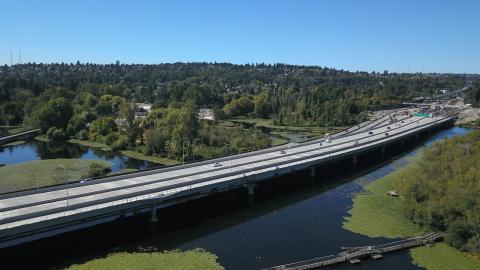 SR 520’s 1960s-era west approach bridge, supported by hollow columns, was at risk of failure in a severe earthquake. In addition, the highway’s old, four-lane segment in Seattle is typically at capacity during peak periods. This important new section of the highway connects the floating bridge to Seattle’s Montlake neighborhood. This project provides a number of benefits:

The project was funded by a variety of state and federal sources. The final cost of the West Approach Bridge North Project was approximately $264 million.