The southbound Interstate 5 off-ramp to Mercer Street, and the express lanes exit to Mercer St., will fully close beginning at 4 a.m. Saturday, Feb. 11 through 4 a.m. Monday, Feb. 13. Crews will be working on a new retaining wall. Detours will be in place.

The off-ramp will reopen from 6pm-8pm on Saturday, Feb. 11 to allow for traffic to access an event at Climate Pledge Arena. The ramp will close for the remainder of the weekend following that.

The westbound SR 520 off-ramp to southbound I-5 is reduced to one lane through at least February 2023.

Any schedule changes to upcoming closures will be communicated here and on the SR 520 Construction Corner webpage. 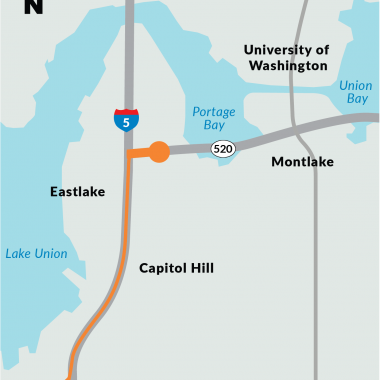 Over the last decade, Seattle’s population and employment boomed, especially in the South Lake Union neighborhood. At the same time, the Eastside’s technology-driven cities continued to see rapid growth. These two factors underscore the importance of a safe, reliable transit/HOV link between Seattle and the Eastside via SR 520. This project addresses this issue by creating a direct bus and carpool connection from SR 520 to South Lake Union and downtown Seattle.

This project is a central part of the larger, ongoing SR 520 Bridge Replacement and HOV Program to reconstruct the SR 520 corridor from I-405 in Bellevue to I-5 in Seattle. We’ve already completed several phases of the program, including:

The Montlake Project, currently under construction, is completing the second of two parallel west approach bridges over Union Bay. This project includes building a new landscaped lid over the highway, and a bicycle and pedestrian bridge to the east of the lid.

The SR 520/I-5 Express Lanes Connection Project’s design was developed through years of coordination between WSDOT, the city of Seattle, and partner transit agencies. Visit the Maps and Drawings tab for renderings of key project elements.

A commitment to equitable contracting

WSDOT is committed to providing equitable contracting opportunities to minority-owned, women-owned, veteran-owned and disadvantaged small businesses (MSVWBEs). Our goal is to provide 26 percent of our transportation projects’ contract value to these firms. See our equal opportunity in contracting webpage for more information and resources for working with WSDOT.

Construction on the SR 520/I-5 Express Lanes Connection Project is expected to last into spring 2024. The work includes building a new, elevated reversible HOV access ramp between SR 520 and the I-5 express lanes, constructing 23 retaining walls, and electrical and real-time traffic signage work. The prime contractor, Walsh Construction, has open contracting opportunities on the project for qualified MSVWBE firms for landscaping, hydroseeding, and Vactor truck operations. Subcontractors interested in working on this project should contact:

The reversible transit/HOV lane initially will open only to transit. Carpools will use the reversible lane following completion of a new Portage Bay Bridge and Roanoke lid.

This project is part of the $2 billion in SR 520 improvements from Lake Washington to I-5 – the “Rest of the West.” These improvements are funded by the 2015 Connecting Washington and 2022 Move Ahead Washington transportation legislation packages.

Rendering of the new direct connection ramp from SR 520 to the I-5 Express Lanes. 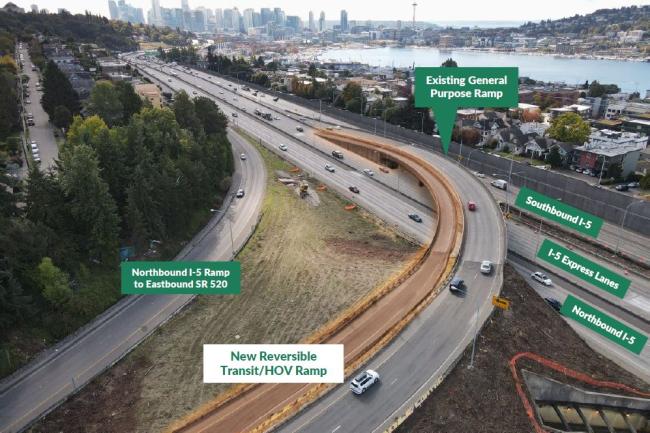 We hosted a virtual public meeting on Aug. 24, 2022. Check out the meeting presentation (PDF 4.19 MB) to catch up on the latest construction updates.