The Gravelly - Thorne Connector will give pedestrians and bicyclists access to the Tillicum and Woodbrook neighborhoods of Lakewood, from Gravelly Lake Drive

This information will be updated once the project gets closer to construction. 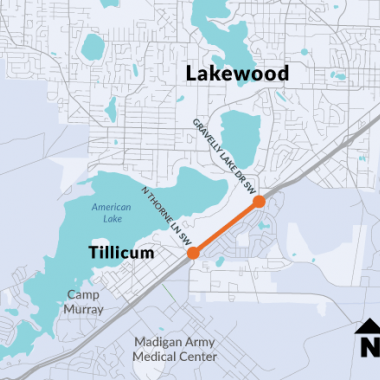 The proposed Gravelly-Thorne Connector will provide access to Lakewood neighborhoods of Tillicum and Woodbrook for pedestrians and bicyclists from Gravelly Lake Drive south to Thorne Lane.

The initial Gravelly-Thorne Connector proposal included one motor vehicle lane and a shared-use path, to be built in stage 4 of the overall I-5 - Mounts Road to Thorne Lane I/C - Corridor Improvements project.

In the second phase of construction during the overall project, the design-build contractor, Guy F. Atkinson Construction, included in their design a new auxiliary lane to southbound I-5 between Gravelly Lake Drive and Thorne Lane. This new auxiliary lane provides capacity for traffic entering southbound I-5 at Gravelly Lake Drive and exiting at Thorne Lane or Berkeley Street. Based on traffic analysis, this new addition to the design in stage 2 construction will replace the motor-vehicle lane that was initially included in the Gravelly-Thorne Connector proposal.

Initially included in stage 4 construction was a proposed bicycle and pedestrian path between Lakewood and DuPont, providing a multi-modal option for travel beyond the Gravelly-Thorne Connector project.

A stakeholder engagement process evaluated options and determined that a Shared-Use Path alignment through Lewis North (parallel to roads open to the public) would best meet this need. The shared use path between Lakewood and DuPont will be addressed in a future project, separate from the Gravelly-Thorne Connector project.

In July 2015, the Washington State Legislature included $495 million to fund the I-5 Mounts Road to Thorne Lane Interchange - Corridor Improvements project, as part of the Connecting Washington transportation package. This project is funded through a 10 year period, from 2015-2025.