WSDOT extended the auxiliary lane south approximately 1.5 miles, so that it starts at the Mounts Road overpass. Trucks approaching the weigh station along with entering and exiting traffic use this lane while the majority of traffic uses the adjacent three through lanes.

To accommodate the auxiliary lane, northbound I-5 was widened into the center median. The final lane configurations includes three 11-foot-wide lanes, one 12-foot-wide lane and 8 feet on the inside shoulder.

An auxiliary lane is a supplemental or extra lane between interchanges. They are frequently used between closely spaced interchanges to allow for maneuvering of entering and exiting traffic, speed changes, weaving and truck climbing.

The extended auxiliary lane will ultimately become part of the HOV lane that is being built in the I-5 Mounts Road to Thorne Lane I/C Corridor Improvements project.

The project is complete. Phase three construction that will widen I-5 to build an HOV lane from  Center Drive to Steilacoom-DuPont Road is expected to begin in 2023. 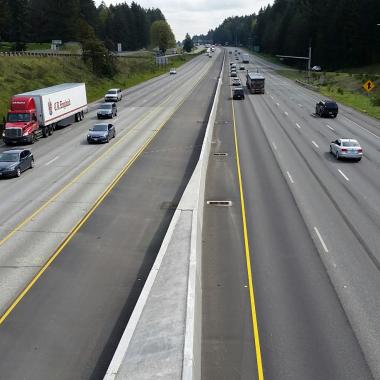 New northbound I-5 auxiliary lane from Mounts Road to Center Drive in DuPont.

Originally built in the 1950s, Interstate 5 is a national highway of strategic importance. It moves goods and people between two borders and links major cities. It is a critical corridor for military use. Over the past several years, traffic has increased along the entire I-5 corridor, and nowhere has that increase been more noticeable than in south Pierce County through the Joint Base Lewis-McChord (JBLM) vicinity.

Traffic volumes on Interstate 5 between Mounts Road and Steilacoom-DuPont Road have increased substantially over the past 10 years. Traffic flow through this 2-mile area is subject to several pressures, including the uphill grade from the Nisqually River valley, entering traffic from Mounts Road, trucks using the weigh station, exiting and entering traffic at the Center Drive interchange and exiting traffic to the Steilacoom-DuPont Road interchange and JBLM’s DuPont Gate.

This project is included in the $495 Million for the I-5 Mounts Road to Thorne Lane Interchange - Corridor Improvements project, as part of the Connecting Washington transportation-revenue package.

This project is part of the overall I-5 Mounts Road to Thorne Lane I/C Corridor Improvements Project.