To relieve chronic traffic congestion and improve mobility along Interstate 5 in the vicinity of Joint Base Lewis-McChord, WSDOT is rebuilding the interchanges at Thorne Lane and Berkeley Street and adding lanes to I-5. Once construction is finished, the new lane in each direction on I-5 will open as a high occupancy vehicle (HOV) lane.

The project has reached substantial completion. In early 2022, the contractor will finish minor punch list items that require a limited number of overnight ramp closures and shoulder closures. Daytime shoulder closures are allowed on both directions of I-5 from 9 a.m. to 3 p.m. in the project limits. Overnight travelers will see single and double lane closures on northbound and southbound I-5 each week night from 8 p.m. to 5 a.m. each following day. Overnight travelers will also see I-5 ramp closures of 41st Division Drive, Berkeley Street/Jackson Avenue, Thorne Lane/Murray Road and Gravelly Lake Drive. Typically, no two adjacent ramps will be closed overnight simultaneously. Signed detours will be in place. 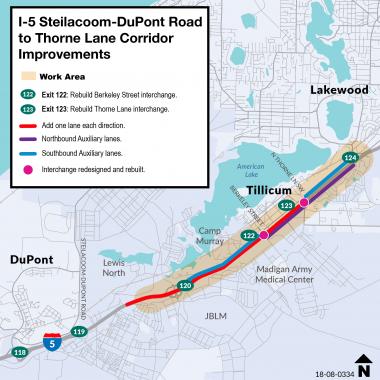 In 2013, a joint I-5 corridor planning study was initiated involving WSDOT, JBLM, FHWA and local jurisdictions. The study evaluated the best way to improve transportation through the JBLM vicinity. The task of the planning study is to define improvements that could relieve congestion on I-5 from Center Drive to Gravelly Lake Drive, with a focus on the interchanges at the Steilacoom-DuPont exit (#119), 41st Division Drive/Main Gate exit (#120), Berkeley Street exit (#122) and the Thorne Lane exit (#123).

This work was performed in three phases. Phase 1 conducted a Corridor Feasibility Study.

During Phase 2, conducted in 2014, WSDOT conducted a comprehensive multi-modal corridor alternative analysis. In this effort, WSDOT evaluated alternatives other than adding lanes to I-5 that could improve mobility along the corridor. Public involvement was an important element of Phase 2.

In Phase 3 of the study, NEPA environmental studies and documentation were conducted for the proposed alternatives. WSDOT and other stakeholders evaluated proposed revisions to interchanges and document them in an Interchange Justification Report (IJR).

In July 2015, the Washington State Legislature included $495 million to fund the I-5 Mounts Road to Thorne Lane Interchange - Corridor Improvements project, as part of the Connecting Washington transportation revenue package. The project is funded through a 10 year period, from 2015-2025.