To relieve chronic traffic congestion and improve mobility along I-5 in the vicinity of Joint Base Lewis-McChord, WSDOT is proposing to rebuild the interchange of Steilacoom-DuPont Road (Exit 119) and adding HOV lanes to I-5. This will support congestion relief on I-5 during peak traffic periods while maintaining access to neighboring communities and JBLM. The proposed build alternative also includes grade separation of the roadway over the railroad. 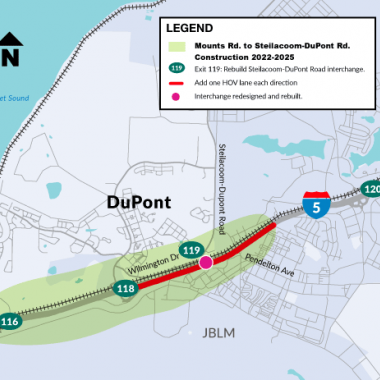 WSDOT is proposing to rebuild the interchange of Steilacoom-DuPont Road (Exit 119) and adding HOV lanes to I-5 to help improve mobility and and improve travel times during peak commute hours.

This project is the third in a series of projects that widen I-5 to bring HOV lanes from Mounts Road near DuPont to Gravelly Lake Drive in Lakewood. In some locations, new overpasses are necessary to add the additional lanes. At the Steilacoom-DuPont Road interchange, the existing 1957 bridge over I-5 has openings that limit the potential to add lanes to the interstate. In addition, the existing overpass is classified as "poor condition" and does not meet current vertical clearance standards from I-5. A new interchange will be built to current design standards and allow for additional lanes of I-5 in both directions.

Current traffic flow is constrained by the close proximity of the ramp intersections, JBLM’s DuPont Gate, the railroad, and the intersection of Wilmington Drive and Barksdale Avenue.

In July 2015, the Washington State Legislature included $495 million to fund the I-5 Mounts Road to Thorne Lane Interchange - Corridor Improvements project, as part of the Connecting Washington transportation package. This project is funded through a 10 year period, from 2015-2025.