The SR 160 - Fauntleroy Terminal - Trestle & Transfer Span Replacement project will replace the aging Fauntleroy ferry terminal to maintain safe and reliable ferry service for people who travel between West Seattle, Vashon Island, the Kitsap Peninsula and beyond. The terminal faces several challenges. Built in the 1950s, parts of the terminal are aging, seismically vulnerable and overdue for replacement. Rising sea levels could damage the structure from debris during high tides in the future .

WSF expects to complete the first phase of this project by late 2022. The Planning and Environmental Linkages (PEL) process is a more collaborative way of approaching transportation decision-making and allows us to consider environmental, community and economic goals earlier in the process.

During this phase, the project team will use input from the community and advisory groups to refine the range of alternatives.

Review the Level 2 Screening Report (PDF 2.8MB)to learn more about the two alternatives advancing to the next phase of the project.

Watch this video to learn about the challenges the replacement project aims to address and the next steps towards construction.

Fauntleroy terminal was built in the 1950s and needs substantial preservation work. The terminal currently faces several challenges, including parts of the terminal are aging, seismically vulnerable and overdue for replacement. Rising sea levels could damage the superstructure from debris during high tides in the future. Long standing operational challenges include long lines caused by vehicles queuing on Fauntleroy Way and a small terminal with only enough dock space for approximately 80 cars and served by three 124-car Issaquah class ferries using a single slip. 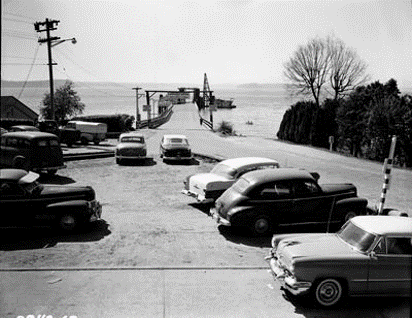 Built in the 1950s, the terminal needs substantial preservation work.

WSF hosted two community meetings and an online open house in May and June 2022 to share why WSF is replacing the Fauntleroy ferry terminal, current progress to date and gather community input on issues to consider during planning.

As WSF advances to Level 2 analysis, the project team will continue to engage its three advisory groups and conduct robust community engagement before completing the PEL study report by mid-2023.

WSF hosted two community meetings and an online open house in May and June 2022 to share information on the project’s purpose and need, project alternatives and initial screening results. Review the engagement summary. You can request summary appendices by emailing FauntleroyTermProj@wsdot.wa.gov.

View the recording of the Tuesday, May 24 community meeting

View the recording of the Wednesday, May 25 community meeting

Washington State Ferries convened three advisory groups in summer 2021 to help shape the project during the planning phase. The advisory groups include representation from the three communities served by the “Triangle Route” (Fauntleroy, Southworth and Vashon Island) to encourage cross-community dialogue and the collaborative identification and development of project alternatives.

The CAG is comprised of people representing Ferry Advisory Committees (FAC), terminal neighbors, ferry customers, environmental and transportation organizations, and numerous other interests from the three communities served by the Fauntleroy/Vashon/Southworth route. The CAG provides feedback about project issues and concerns, community engagement efforts and potential alternatives. Following an open application process, we selected 24 members to serve on this advisory group.

View the recording of the Wednesday, September 21 CAG meeting

Please email FauntleroyTermProj@wsdot.wa.gov if you would like to request recordings or materials from past CAG meetings.

Comprised of technical staff from municipal, county, state, and federal agencies, federal and state resource agencies, as well as local tribes. The purpose of the TAG is to provide technical input on existing conditions, the purpose and need for the project, alternatives development and screening criteria, and the overall practicability of potential concepts, solutions and/or mitigation concepts. The TAG will meet regularly throughout the planning phase.

Currently the TAG includes participation from:

Comprised of local and state appointed or elected officials, transportation agency leadership, federal partners and tribal leadership. The EAG provides advice and input on how to prioritize needs, represent their constituents’ interests, and share feedback on key policy elements and project alternatives.

In Fall 2016, WSF launched a public process to gather community input on how to improve the "Triangle" route.  As part of this process, WSF convened a citizen advisory group called the Triangle Improvement Task Force, an advisory group comprised of volunteers from each community served by the route. In its first year, the Triangle Improvement Task Force focused on short-term operational changes to the Fauntleroy terminal.

In 2018, the task force focused on providing feedback on three of WSF's long-term projects: 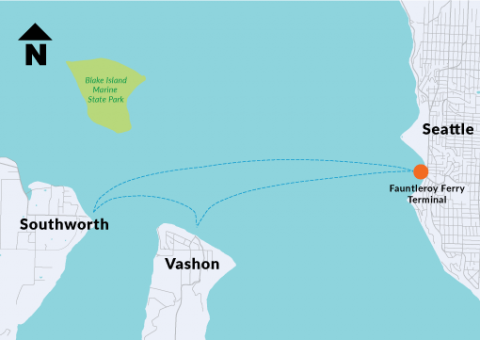 The Fauntleroy Terminal replacement project will consider the following alternatives: 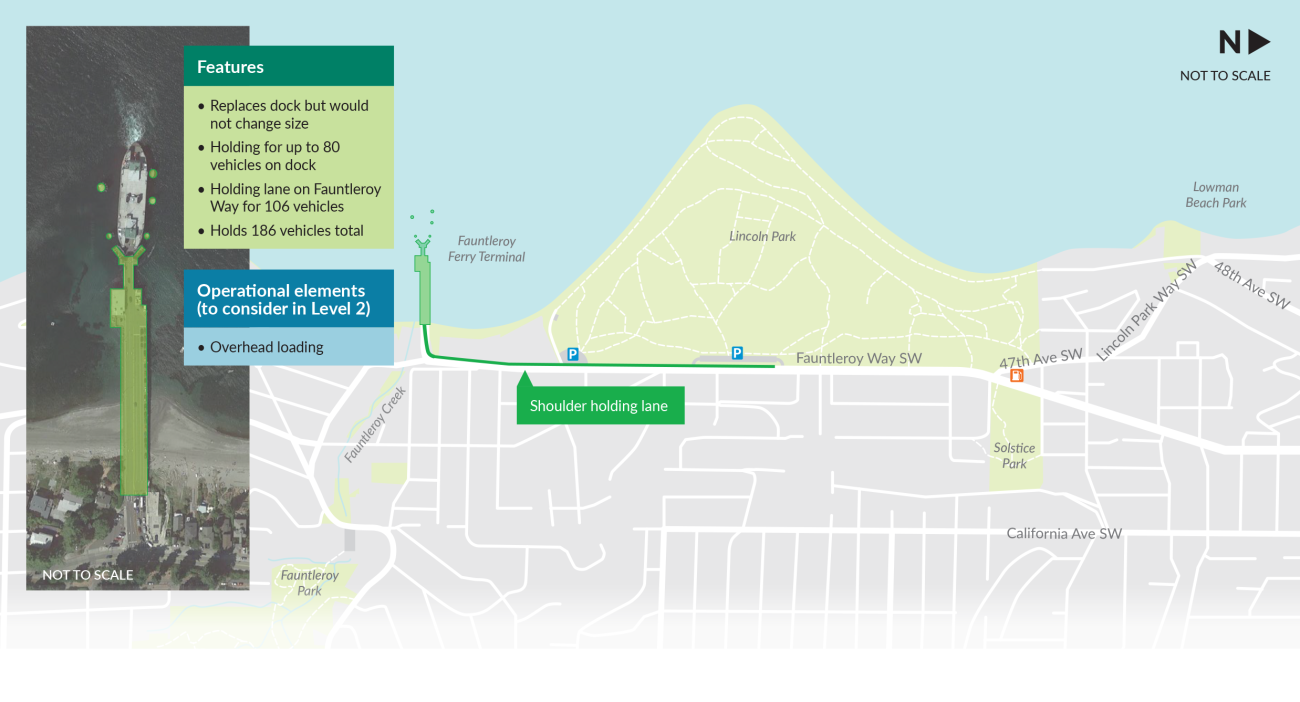 Alternative A-1: Replace dock at same size and location​

This alternative meets many core elements of the purpose and need but may not improve operational efficiency of the terminal on its own without additional operational elements. 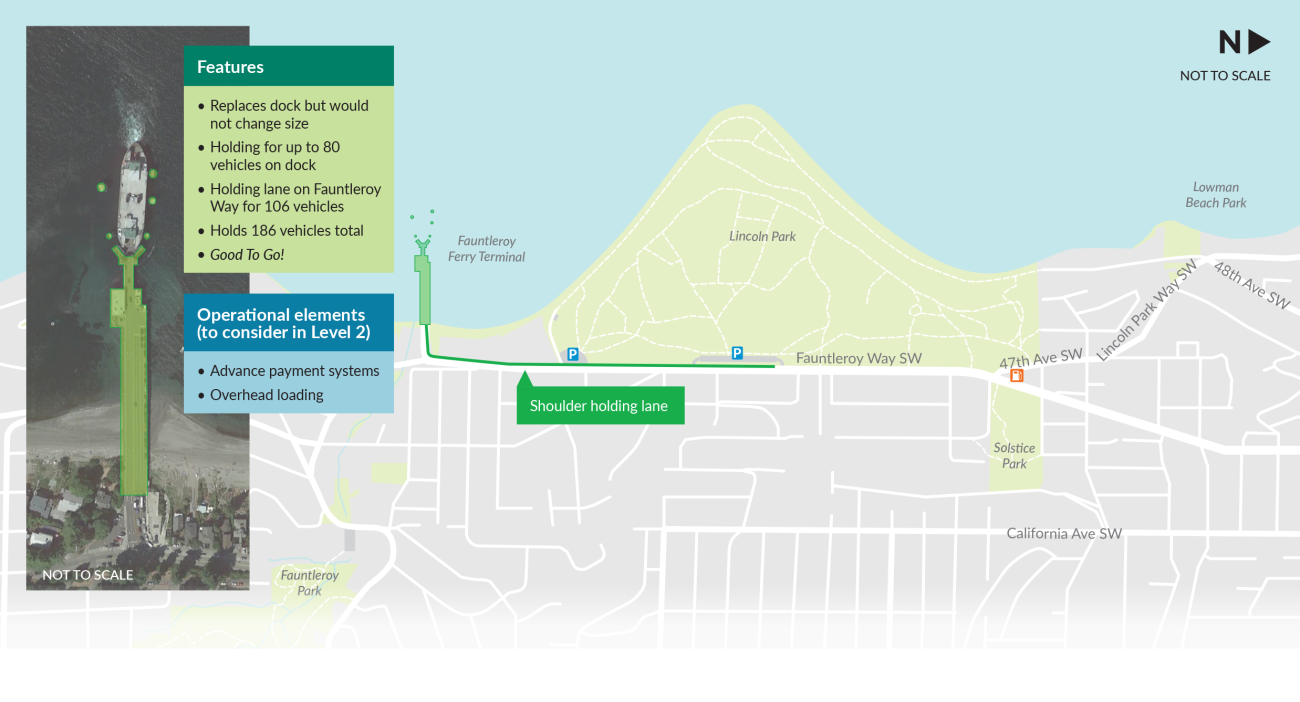 Alternative A-2: Replace dock at same size and location and add Good To Go!​

WSF would need to evaluate the potential benefits of Good To Go! and request authorization to implement this system—a policy change that could delay the project schedule. 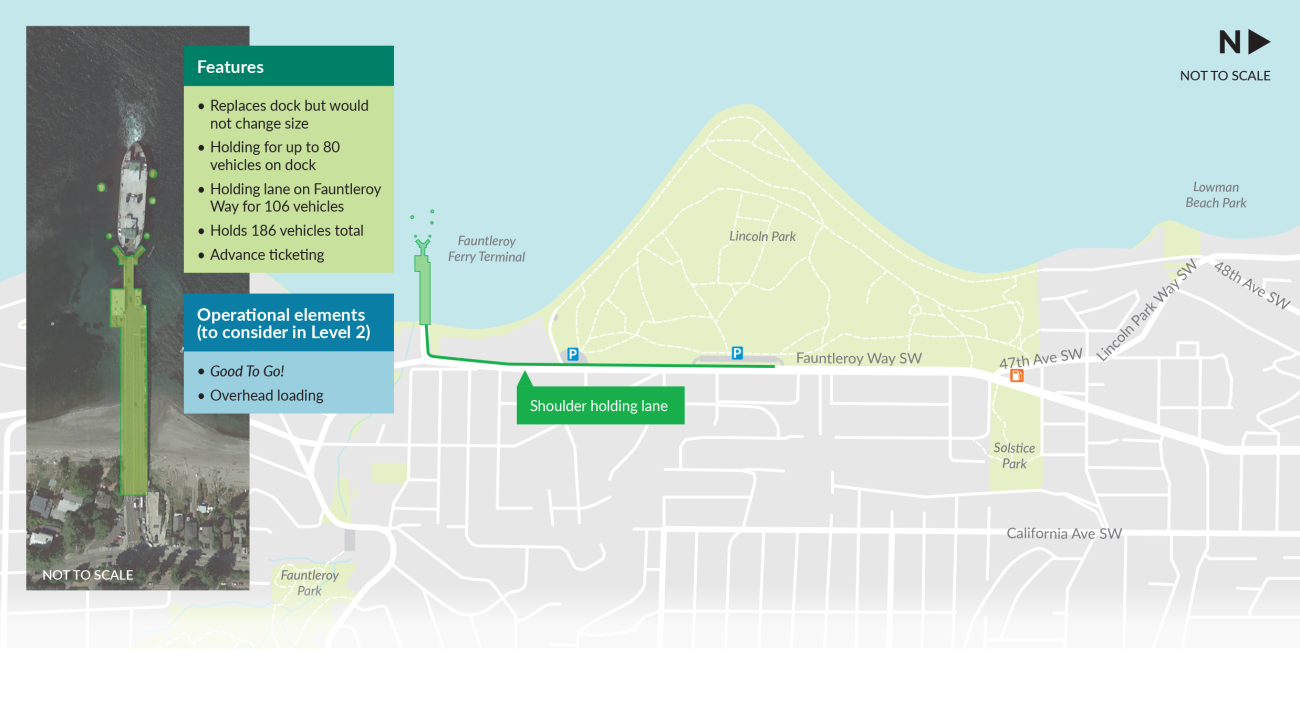 Alternative A-3: Replace dock at same size and location and add advance ticketing​

WSF would need to evaluate the potential benefits of an advanced ticketing system and request authorization to change fare collection processes—a policy change that could delay the project. 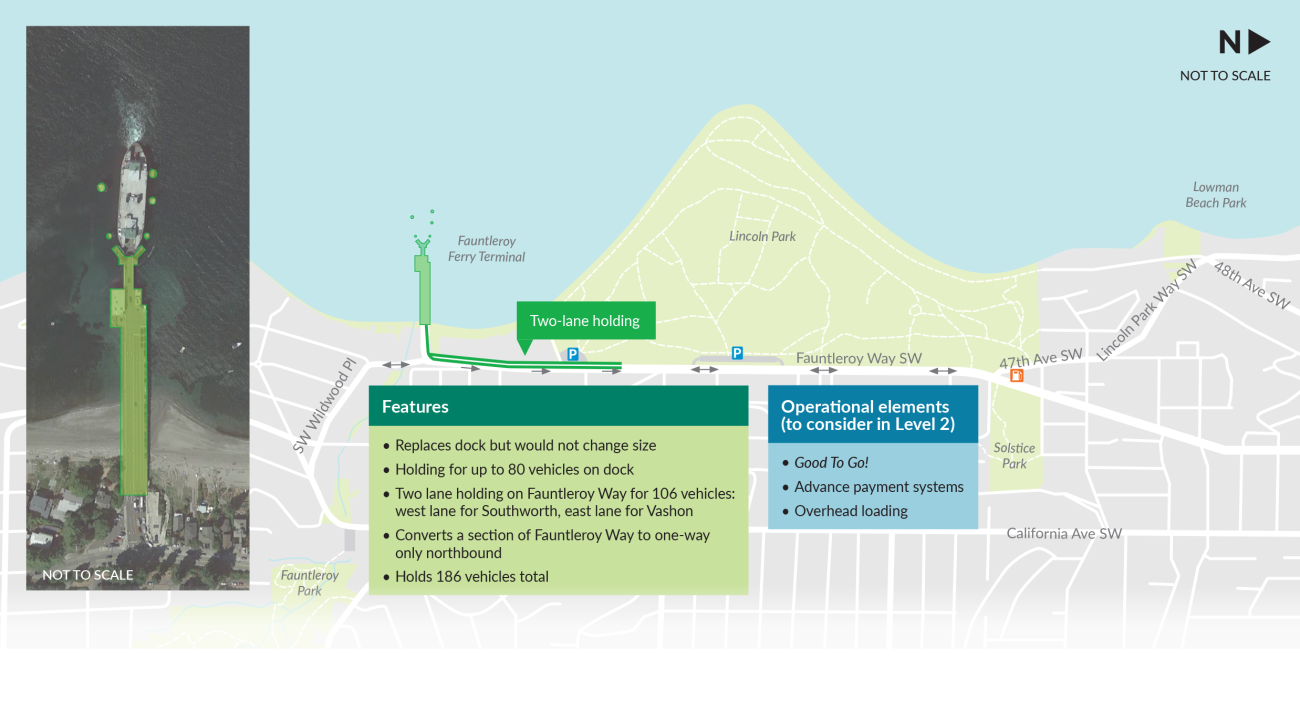 Alternative A-4: Replace dock at same size and location and add two-lane holding on Fauntleroy Way​ 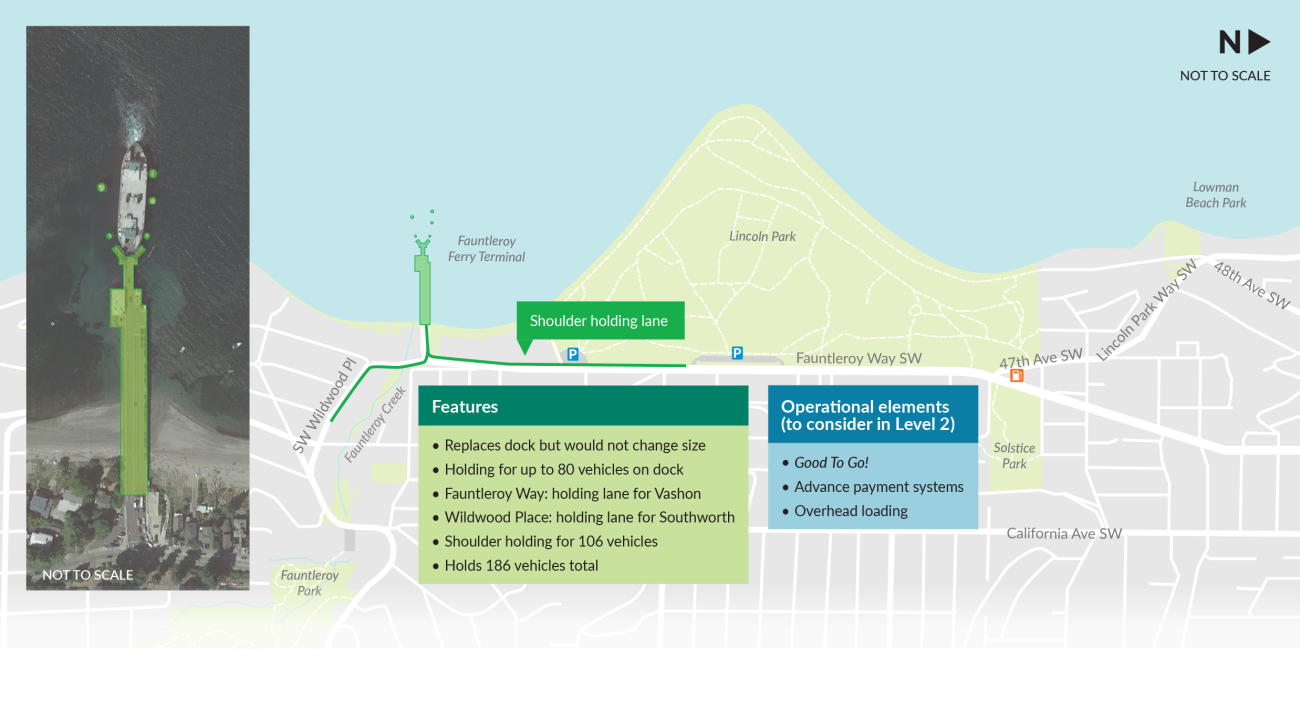 Alternative A-5: Replace dock at same size and location and add two direction approach for holding​ 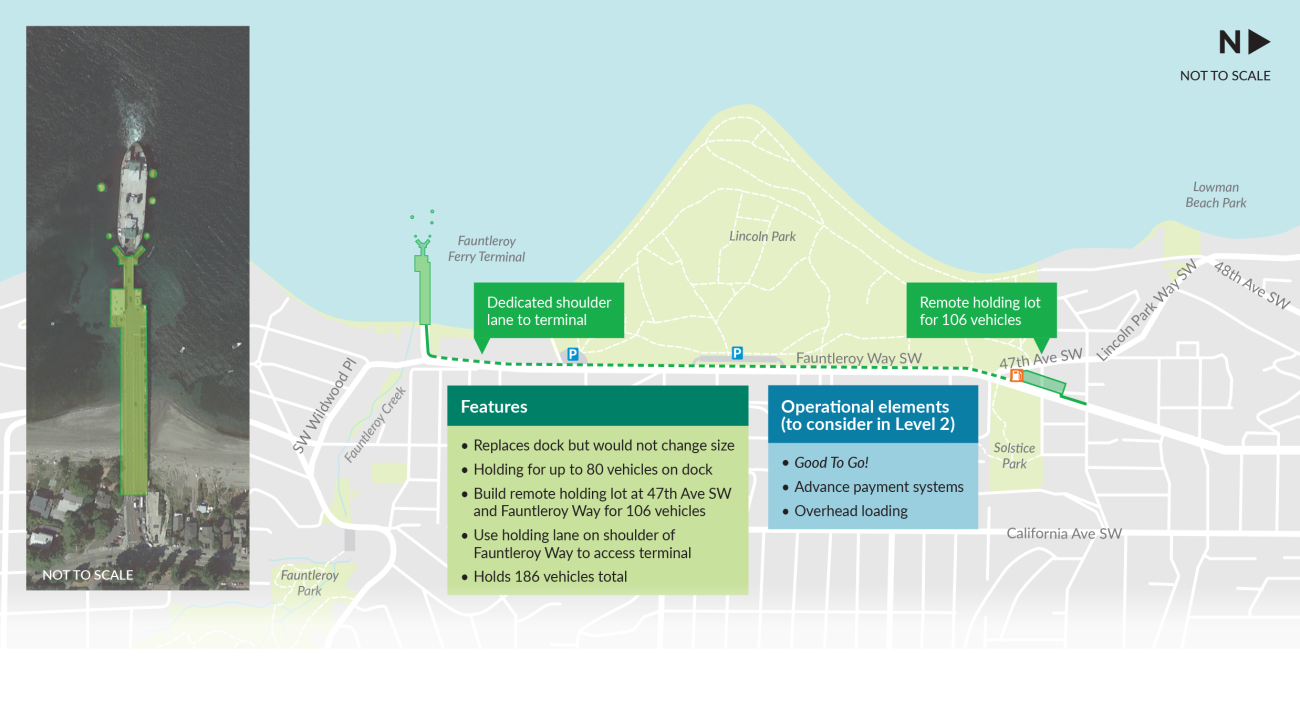 Alternative A-6: Replace dock at same size and location and add remote holding at 47th and Fauntleroy Way​ 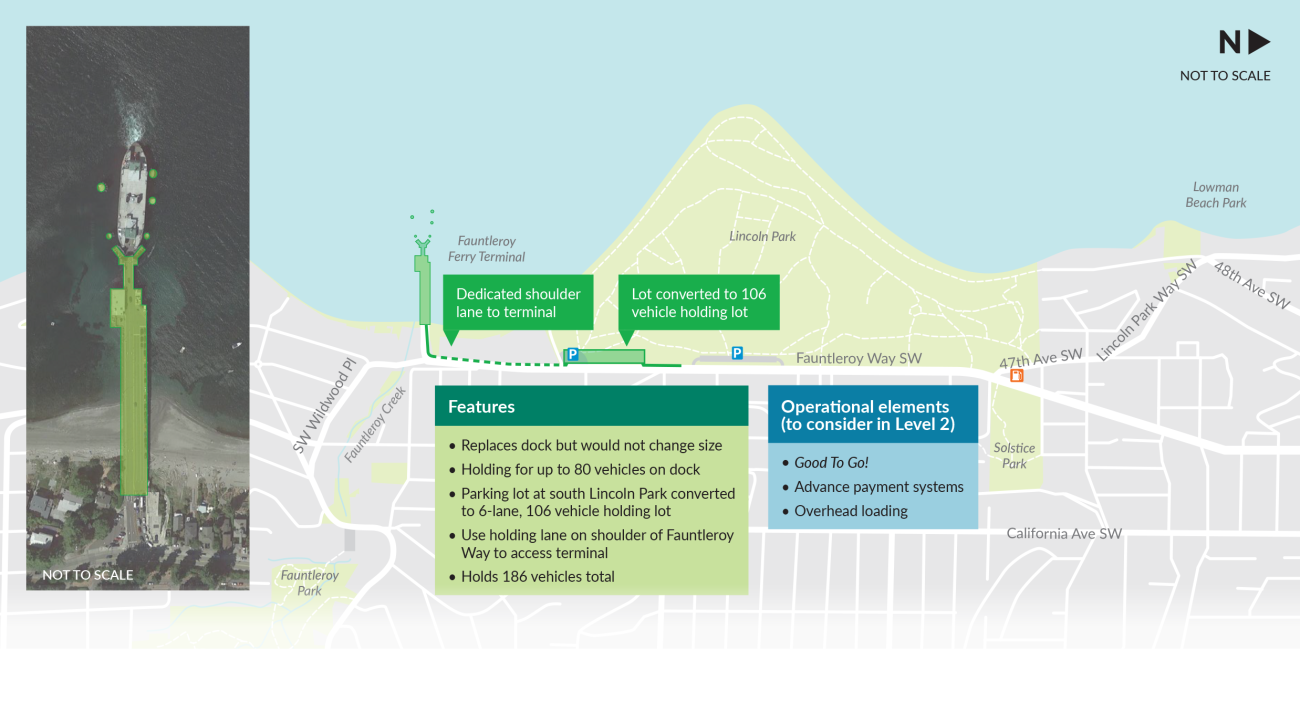 A-7: Replace dock at same size and location and add remote holding at Lincoln Park​ 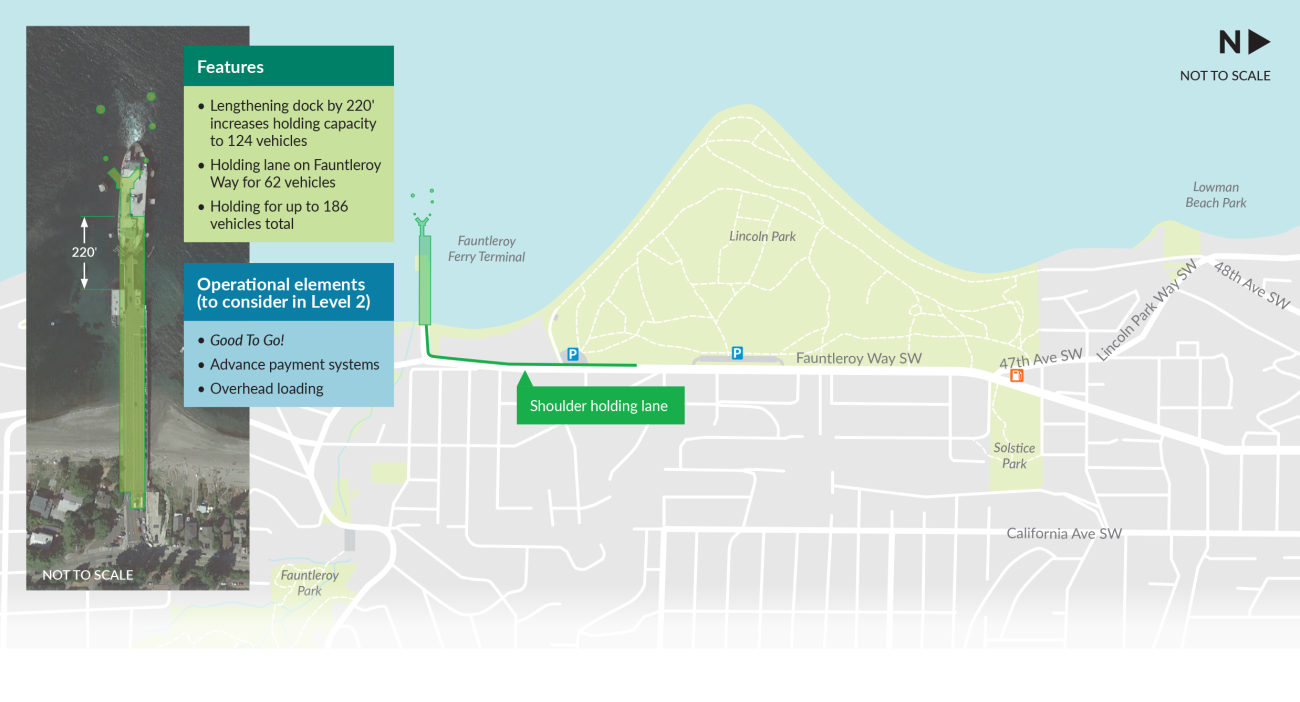 Expanding the dock requires coordination with partner agencies for permitting. 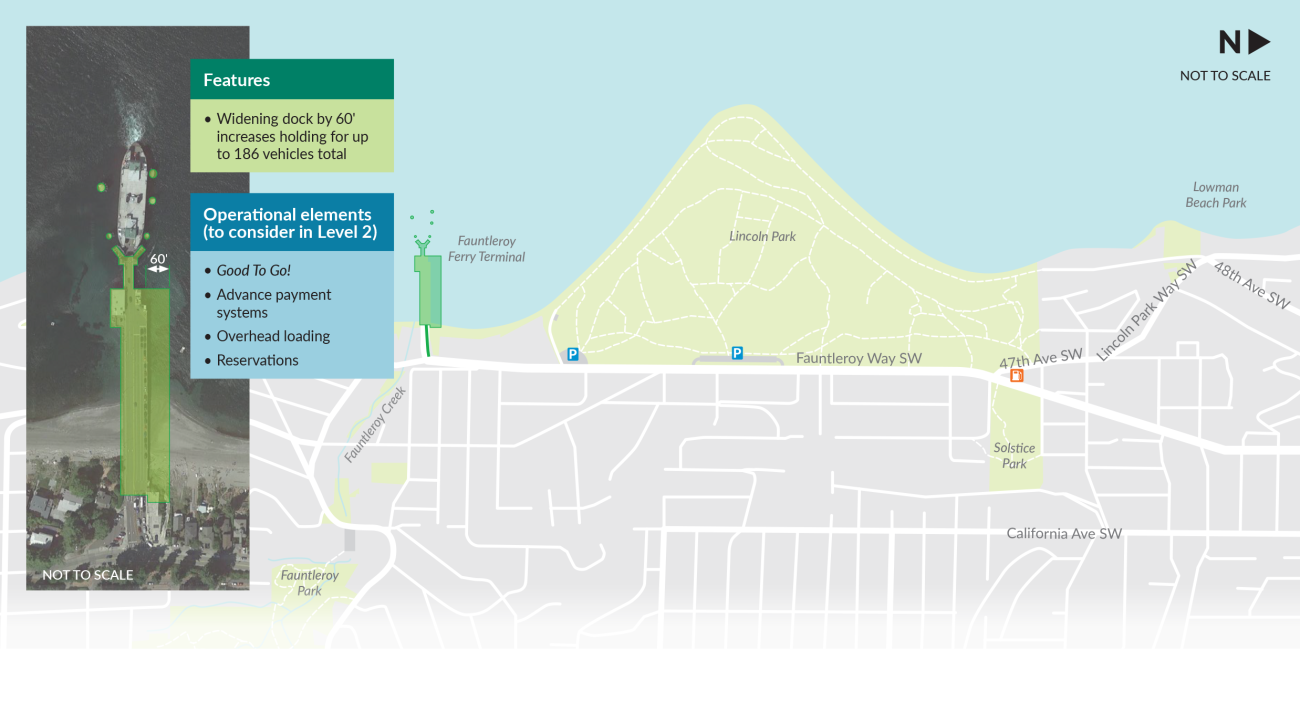 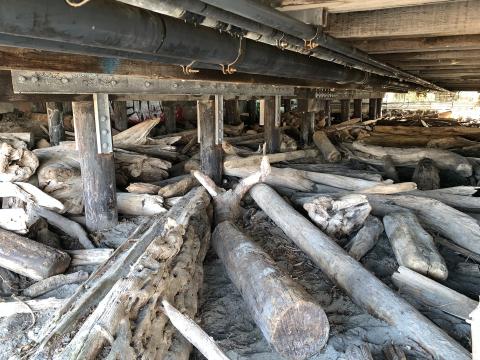 One of biggest challenges facing the Fauntleroy Ferry Terminal is sea level rise. This project will include an extensive environmental review process and plan for future impacts to the terminal due to climate change.