The SR 99 Tunnel is open to drivers. The tunnel is a tolled facility with rates changing on a fixed schedule, depending on the time of day. Drivers with Good To Go! passes pay the lowest rates. 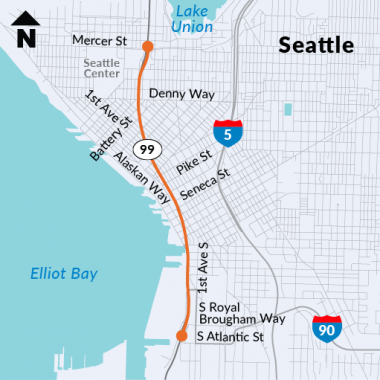 The SR 99 tunnel runs between just west of Seattle's sports stadiums and north of downtown near the Space Needle. The tunnel has no mid-tunnel entrances or exits.

In February 2001, a 6.8 magnitude earthquake struck near Seattle, causing several foundations of the Alaskan Way Viaduct to shift as much as five inches. Engineers believe the viaduct would have collapsed had the earthquake lasted a few moments longer. During the next decade, state and local agencies studied more than 90 alternatives to replace the aging viaduct, which carried SR 99 through Seattle. In 2009, a deep-bored tunnel was chosen. One of the advantages of this option was that it allowed the viaduct, which remained safe for daily use, to remain open during most of tunnel construction.

The tunnel boring machine "Bertha" began digging the SR 99 tunnel in 2013. Bertha completed her dig in 2017 and the tunnel opened to drivers on February 4, 2019.

Get tolling information on the Good To Go! pass website.