This project completes final roadway work around the south portal of the SR 99 tunnel and builds new pedestrian and bicycle amenities that connect Seattle’s stadiums with the waterfront.

Starting as soon as Monday, Jan. 9, South Charles Street will be closed between First Avenue South and Occidental Avenue South for up to 45 days. During this closure, drivers can use Royal Brougham Way or South King Street as alternative routes. A pedestrian route will be maintained around the work zone.

Construction is ongoing on the east side of First Avenue South between South Charles Street and South Dearborn Street. Occasional short-term sidewalk or lane closures and detours will occur to provide safe space for construction crews and equipment. 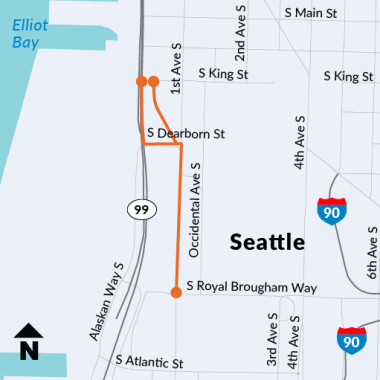 The project completes road work around the south portal of the SR 99 tunnel, near Seattle's stadiums.

Construction began in July 2021 and is expected to conclude in summer 2023. First Avenue South and Alaskan Way South will be kept open for the vast majority of the work, and the project is not expected to require much night work. People travelling along First Avenue South near Seattle's stadiums may encounter lane closures and reductions, and occasional sidewalk detours.

Construction began in July 2021 and is expected to conclude by summer 2023.

The City of Seattle is leading the rebuilding of the new Alaskan Way in the footprint of the old viaduct, which will connect to the new pedestrian plazas being built as part of this project.