This project will improve safety at the intersection of SR 503 and NE Rock Creek Road by installing a compact roundabout.

A compact roundabout will be constructed to improve safety at this intersection. 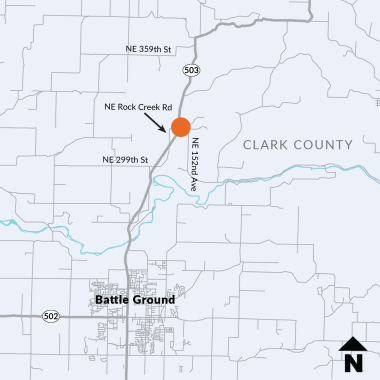 This intersection was identified as an ideal location for a compact roundabout due to the number of collisions observed during a five-year analysis period, from January 2013 to December 2017. A compact roundabout has the highest safety benefit due to the reduced number and severity of conflict points when compared to the existing configuration.

Studies have shown that roundabouts are safer than traditional stop sign or traffic signal controlled intersections. Roundabouts reduced injury crashes by 75 percent at intersections where stop signs or traffic signals were previously used for traffic control, according to a study by the Insurance Institute for Highway Safety (IIHS). The roundabout will also reduce speeds, which is a contributing factor to the number of collisions.

Milestone
2022
Project is in pre-design.

The estimated cost of the project is approximately $684,900, using a combination of state and federal funds.

There are no additional maps & drawings for this project.