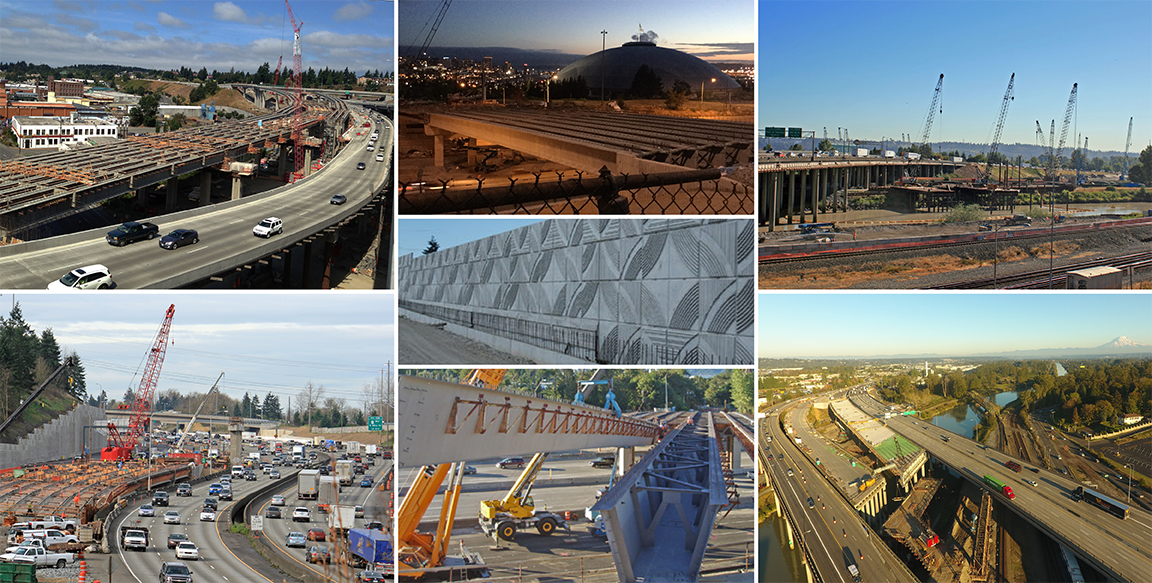 The Tacoma/Pierce County HOV Program is a series of projects, spanning over 20 years, that build high-occupancy-vehicle (HOV) lanes on I-5, SR 16 and SR 167 in Pierce County.

The I-5 Portland Avenue to Port of Tacoma Road - Southbound HOV project began in February 2019 and is expected to finish in 2022. This is the final funded project on I-5 in the Tacoma/Pierce County HOV Program.
Contact
Cara Mitchell
WSDOT Communications
cara.mitchell@wsdot.wa.gov
360-357-2703

During construction, travelers can expect:

In addition new HOV lanes, these projects include many other improvements:

HOV stands for High Occupancy Vehicle, and is a designation WSDOT gives to highway lanes restricted to vehicles carrying two persons or more. In the early 1990s, WSDOT began in earnest to build a core HOV system on state highways around greater Seattle, and has been expanding the system ever since.

WSDOT believes we cannot build our way out of congestion. However, we can make the best possible use of new and existing highway capacity. To that end, WSDOT has established policies regarding the HOV system. The goals of the system are:

Through HOV programs and policies, we strive to make the best use of existing facilities by increasing freeway efficiency and promoting programs to move more people in fewer vehicles.

Public involvement activities started as early as July 1993 when the program was initially envisioned. Since then, public presentations, open houses and hearings have been held to provide opportunities for public input.

The Tacoma/Pierce County HOV Program consists of a series of a projects that started in 2001 and will continue through 2022.

I-5: Portland Avenue to Port of Tacoma Road - Southbound HOV

Construction began on the I-5: Portland Avenue to Port of Tacoma Road - Southbound HOV project in February 2019. This project realigns and builds a new southbound I-5 bridge over the Puyallup River and removes the 1960s era northbound and southbound Puyallup River Bridges. The project also builds a new I-5/East L Street overpass, widens northbound and southbound I-5 for HOV lanes, rehabilitates mainline I-5 pavement, upgrades signing and illumination, and builds new stormwater collection and treatment facilities.

This SR 167 - SR 410 to SR 18 NB Congestion Management project began in May 2021. The contractor built a new northbound HOV lane on SR 167. The new HOV lane begins near State Route 410 in Pierce County, and continues north and tie into the existing SR 167 HOT Lane near Auburn in King County. A section of the new HOV lane opened Friday, Aug. 12. This lane will transition to an Express Toll Lane (ETL) at a future date. The remaining portion of the northbound HOV lane will open by the end of September.

We have completed several projects within the Tacoma/Pierce County HOV Program. Each project laid the foundation for the next, and contributed to the bigger transportation picture in Pierce County.

This project widened I-5 at the SR 16 interchange for direct connect HOV lanes between the two highways. In 2017, crews began building a new HOV viaduct bridge structure for eastbound and westbound SR 16 travelers. The project replaced aging pavement on I-5, upgraded signing, ITS, illumination and stormwater collection facilities. This was the final project that rebuilt the Nalley Valley Viaduct.

This project began in 2014 and built three new bridges and widened both directions of I-5. It was considered one of the more challenging projects because of the small work space available for staging construction equipment. In this contract, crews reconstructed the I-5/Pacific Avenue and I-5/McKinley Way overpasses and built a new I-5 bridge over SR 7 and I-705. The project upgraded signing, illumination, and stormwater collection facilities, and replaced the original roadway surface of I-5 as it had reached the end of its life.

This project started in 2015, and finished in 2018. Crews realigned and built a new northbound I-5 bridge over the Puyallup River, and a new exit and ramp to SR 167. This project widened a section of I-5 for future HOV lanes, replaced aging roadway surface on I-5 and made improvements to the I-5/Portland Avenue interchange.

The eastbound Nalley Valley construction contract built a new eastbound connection between SR 16 and Interstate 5. The new eastbound viaduct and associated ramps opened to traffic in August 2014. This was the second of three projects that rebuilt the Nalley Valley Viaduct.

In this first contract, crews focused on widening, seismic upgrades and ground improvements to prepare for future projects that will ultimately help improve traffic flow on I-5 through Tacoma.

Crews opened almost 6 HOV lane miles on I-5 (3 northbound and 3 southbound) from the King County Line to the Port of Tacoma Road.

Although the new Tacoma Narrows Bridge is not funded with monies in the HOV Program (it is funded through tolls instead), HOV projects sandwich the bridge, making it a vital transportation link for HOV projects in Pierce County. All construction included in the bridge project is now complete. The bridge opened to traffic on July 15, 2007.

This project prepared for the reconstruction of the Nalley Valley Viaduct. It also built a new collector/distributor lane, wider shoulders and reconstructed the Yakima/Thompson and G Street/Delin bridges over I-5. The project also relocated the I-5 exit to downtown Tacoma.

Widened and made improvements to SR 16 for future HOV lanes.

This contract built a new pedestrian bridge, modified ramps, rebuilt the interchange and widened I-5 for future HOV lanes. 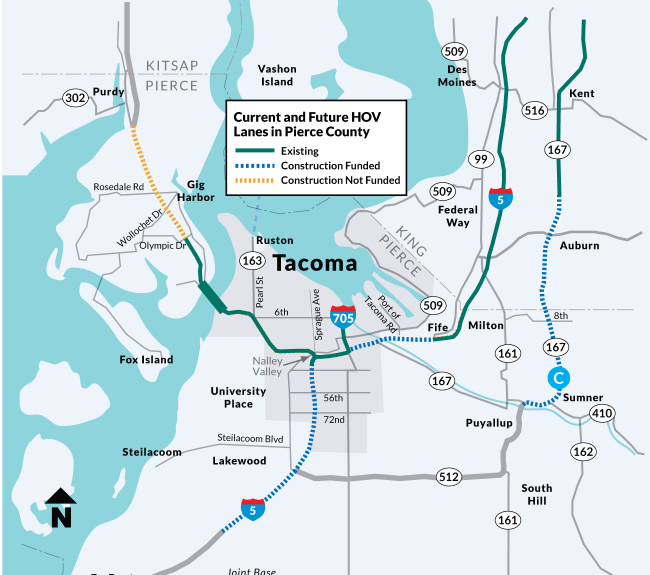 Completed projects as of August 2022

The green line on this map shows where we have completed HOV projects on Interstate 5 from Federal Way to Fife, and in Tacoma, from East McKinley Way to South 48th Street. The map also shows the connected HOV lanes from I-5 to State Route 16 in Tacoma. The HOV lanes on SR 16 continue across the Tacoma Narrows Bridge to Olympic Drive in Gig Harbor.

The dashed blue line on this map shows two HOV projects currently under construction that will wrap up in late summer or early fall 2022. This is where the new southbound I-5 Puyallup River Bridge was recently built. The project limits span from 54th Avenue East in Fife to East L Street in Tacoma.

The second dashed blue line is shown on State Route 167 from Puyallup in Pierce County to Auburn in King County. This project is adding a northbound HOV lane on SR 167 from Puyallup to Auburn. A large section of this HOV lane was opened on Aug. 12. The remaining portion will open in September 2022.

The yellow dashed lines on the map represents areas on SR 16 that were identified for HOV improvements but currently do not have funding for construction. These locations include extending HOV lanes on SR 16 from the Olympic Drive Interchange to Purdy. 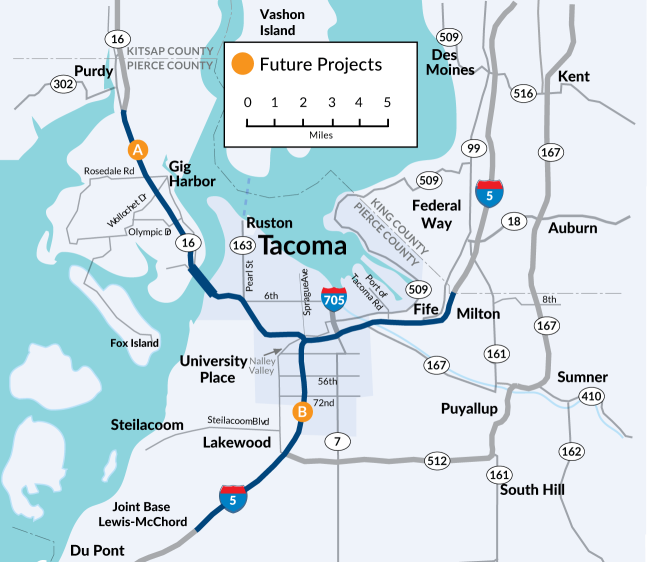 I-5/S. 38th Street to Thorne Lane - HOV Lanes adds HOV lanes in both directions on I-5 from South 38th Street to the JBLM HOV lanes. This project has funding included in the Move Ahead Washington Transportation Package. Delivery schedule has not been identified.

I-5 Port of Tacoma Road to King County Line Project

In April 2010, The Washington State Department of Transportation issued a Determination of Non-Significance (PDF 22 KB) for the following three projects within the Tacoma/Pierce County HOV Program:

Each of these projects will improve traffic flow, increase traffic safety by designing and constructing southbound and northbound HOV lanes on I-5, improving ramp alignments and adding auxiliary lanes.