Reconstruction of the interchange was staged to keep people and goods moving. The first two stages of work rebuilt the westbound and eastbound Nalley Valley viaduct bridges. The last stage could not be built until the other two were complete.

HOV travelers are now using direct-access ramps connecting I-5 HOV lanes to SR 16 HOV lanes. There is added capacity and improved traffic flow. There is a reduction in conflicting movements and weaving areas. 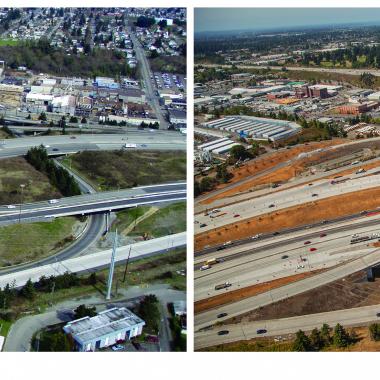 In 1971, the State Route 16 Nalley Valley Viaduct opened to travelers. At that time, approximately 41,000 vehicles used the viaduct each day.

As the population of Pierce County continued to grow, transportation planners realized that expansion of the viaduct was necessary. The original Nalley Valley interchange was too narrow to carry additional lanes and the unique structure-type prevented widening.

In 2008, WSDOT began rebuilding this important interchange. The work was divided into three separate projects:

​​In 2019, average annual daily traffic volumes for State Route 16 and the Nalley Valley Viaduct was at 135,000 vehicles.