I-5 - Portland Avenue to Port of Tacoma Road - Southbound HOV

This project replaces the 1965 southbound I-5 Puyallup River Bridge. The new bridge is built to current seismic standards and will be straighter and wider than the previous bridge.

Once finished, this project will open HOV lanes in both directions on I-5 from SR 16 in Tacoma to Fife.

At 5 a.m. on Wednesday, May 4, the intersection of East L Street and East 27th Street/East Wiley Street will close around-the-clock until 5 p.m., Friday, May 27. During the three-week closure crews will build sidewalks and curbs, install lighting and utilities, and connect East 27th Street to align with the new East L Street bridge that spans I-5. A signed detour (PDF 1MB) will be in place using East Portland Avenue to Puyallup Avenue to East D Street and McKinley Way. Drivers can also use East N Street, East 26th Street and East L Street to Puyallup Avenue.

As of Friday, April 1, all southbound travel lanes are on the new southbound I-5 Puyallup River Bridge. Five out of six new southbound lanes are open for travelers, including four general purpose lanes and an auxiliary lane.  The southbound I-5 HOV lane will remain closed until summer. Crews need this lane as a work zone for the East L Street overpass construction.

In the coming weeks, crews will remove temporary barrier and restripe the northbound lanes of I-5 in the project limits into their final configuration. Night time drivers will want to stay alert in work zones to help keep crews safe.

Construction crews have reopened 20th Street East in Fife under I-5 following their work of removing and demolishing sections of the old northbound and southbound I-5 bridges that were built in the 1960s. Approximately 80% of the old bridge structures have been removed. 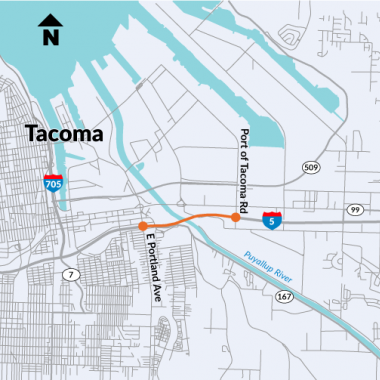 This project builds a new southbound I-5 Puyallup River Bridge.

This project is part of the Tacoma/Pierce County HOV Program, a series of highway projects to provide operational improvements and high-occupancy-vehicle (HOV) lanes on Interstate 5 (I-5), State Route 16 (SR 16), and State Route 167 (SR 167). Through Tacoma, heavy I-5 traffic creates frequent congestion. HOV lanes will help ensure that transit, vanpools and carpools move efficiently through the corridor, especially when traffic is congested in the adjacent general-purpose lanes. This reliability tends to increase ridership in multi-passenger vehicles and thereby helps ease demand in the general-purpose lanes, making the overall highway system work better for everyone.