On Monday, Aug. 15 the ramp meters at Jovita Boulevard/Stewart Road and Ellingson Road to northbound SR 167 will reactivate. These locations were modified to include two metered general-purpose lanes.  A third new ramp meter, located at the 24th Street on-ramp to northbound SR 167 in Sumner will turn on later this summer.

During construction, travelers will see overnight lane and ramp closures, a reduced speed limit in work zones, narrowed shoulders in work zones, and shifted lanes. There will also be a temporary bicycle detour and a change to permanent bicycle route. 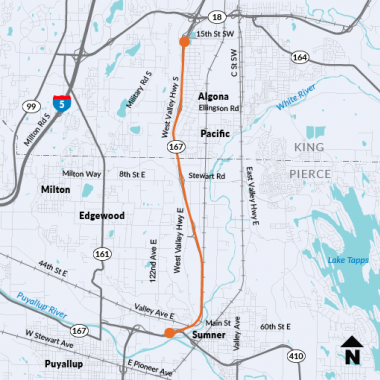 WSDOT is adding an additional northbound HOV lane within the existing pavement width that will begin near State Route 410 in Pierce County, and continue north and tie into the existing SR 167 HOT Lane near Auburn in King County. Once construction is complete, the additional lane will open as a HOV lane and transition to an Express Toll Lane (ETL) at a future date. New ITS devices such as traffic cameras and ramp meters will be added to the corridor. Ramp meters will help manage the flow of vehicles that merge on to the highway.

This section of SR 167 was identified in the Tacoma/Pierce County HOV Program which inclues a series of projects that build high-occupancy-vehicle (HOV) lanes on I-5, SR 16 and SR 167 in Pierce County.

Engineering and construction costs for this project are estimated at $33.5 million.