This project demolished the double-deck viaduct that carried SR 99 along Seattle's central waterfront. The final section of viaduct was demolished in 2019.

Work removing the Alaskan Way Viaduct is complete. The City of Seattle's Office of the Waterfront is leading the building of the new Alaskan Way surface street where the viaduct once stood. 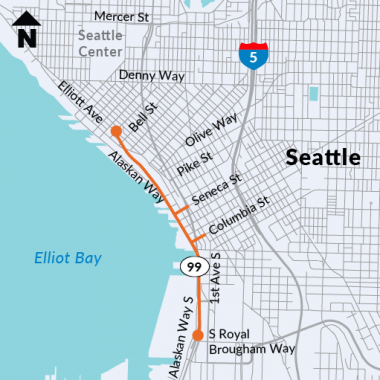 The Alaskan Way Viaduct was a double-deck concrete highway running along Seattle’s central waterfront. Built in the 1950s, the viaduct was damaged in the 2001 Nisqually Earthquake. While the viaduct was strengthened and safe for daily use, the structure remained seismically vulnerable.

The viaduct's southern mile was demolished in 2011 as part of the Holgate to King Street Project. The remaining section was closed to vehicles in January 2019 in preparation for opening the SR 99 tunnel that replaced the viaduct's role in moving people into and through downtown Seattle. Demolition began in full in February 2019 and was completed by November 2019.

Removing a two-story concrete structure along a busy waterfront, and only feet from nearby buildings, was a daunting technical task. The contractor, Kiewit Infrastructure West Co., completed the work without any reportable injuries or significant damage to property, and while keeping Alaskan Way open. The project also included building a new, temporary pedestrian bridge to the adjacent Multimodal Terminal at Colman Dock.

The southern mile of the viaduct was demolished in 2011 as part of the Holgate to King Street Project. Crews began demolishing the remaining span in January 2019 and the final piece was removed in November 2019.

Milestone
January 11, 2019
Crews demolished a small section of viaduct as part of final work to open the SR 99 tunnel
February 12, 2019
Demolition began on the remaining viaduct structure between South Dearborn Street and Battery Street
November 21, 2019
The final segment of the viaduct was cut and removed