The SR 509 Completion Project in King County is part of the Puget Sound Gateway Program, which also includes the SR 167 Completion Project in Pierce County. Together, these projects complete two of the Puget Sound region’s most critical freight corridors and improve access to I-5, the ports of Tacoma and Seattle and Seattle-Tacoma International Airport. The SR 509 Completion Project builds a new four-lane expressway between I-5 and SR 509's current end near Sea-Tac Airport, builds new I-5 ramps, improves I-5 interchanges in south King County and constructs new bridges. When complete, the project will create an important north-south alternative to the congested I-5 corridor between Seattle and south King County.

When construction starts in November 2021, drivers on I-5 can expect southbound lanes of I-5 in the vicinity of the SR 516 interchange in Kent to shift towards the median as crews begin work to widen the I-5 bridge over SR 516.

In early 2022, work on I-5 starts at the South 216th Street bridge where Des Moines and SeaTac meet. Travelers should expect lane shifts and nighttime lane closures in the area.

In SeaTac, a temporary bypass on SR 99 between South 204th and South 208th streets remains in place until late 2022, when a new SR 99 bridge over the future SR 509 Expressway will be completed. 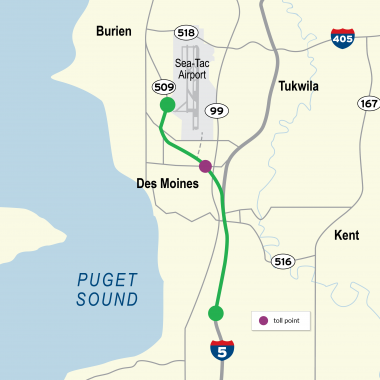 The SR 509 Completion Project completes 3 miles of the unfinished SR 509 to I-5, making SR 509 a key component of the Seattle and south King County transportation network. The new road will be called an expressway and will be tolled at one electronic toll point (no tollbooths).

In 2015, the Washington state Legislature funded the SR 509 Completion Project in King County and SR 167 Completion Project in Pierce County jointly, under the Puget Sound Gateway Program. Combining both of these large projects helps maximize efficiencies in planning, environmental review, design and construction.

First stage of construction (Stage 1a) - In progress

For the first stage of the SR 509 Completion Project, WSDOT partnered with Sound Transit’s Federal Way Link Extension project to build a new SR 99 bridge near South 208th Street and new walls to reduce noise to nearby neighborhoods. The partnership reduces construction impacts by building both projects at the same time. Work is expected to be complete in late 2022.

Second stage of construction (Stage 1b) - In progress

This second stage of the SR 509 Completion Project, called the SR 509/I-5 to 24th Avenue South – New Expressway Project, builds the first mile of new SR 509 Expressway, new I-5 ramps, new interchanges and a new bridge. Project visualizations are available on our Flickr page and WSDOT's online open house. This stage of construction is expected to be complete in 2025.

This third stage of the SR 509 Completion Project, called the SR 509/24th Avenue South to South 188th Street – New Expressway Project, builds the remaining two miles of new SR 509 Expressway and adds a southbound auxiliary lane on I-5 between SR 516 and South 272nd Street. Construction is expected to start in 2024 and end in 2028.

The Puget Sound Gateway Program has approximately $2 billion in funding from four sources:

Photos and visualizations can be found on the Puget Sound Gateway Program Flickr site.

Please call the construction information line at 206-225-0674 or email at sr509construction@wsdot.wa.gov