Crews reopened State Route 112 near Clallam Bay to two-way travel at 6 p.m. Monday, March 21. The highway closed on Monday, Nov. 15, 2021 due to massive landslide and regionwide flooding. The detour using Eagle Crest Way has been removed.

Crews worked to remove additional slide debris that fell in March. They installed a new culvert across the bottom of the slide to convey surface water under the road. In addition to a new culvert, crews finished final paving of the eastbound lane and made repairs to Eagle Crest Way.

This project is now complete. 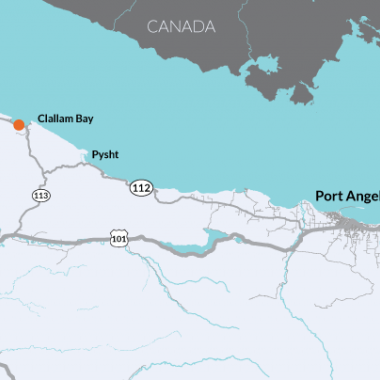 The initial slide began mid-November 2021, covering SR 112 near Clallam Bay was 275 feet wide and covered 325 feet of highway. Since then, another 300 feet of debris has fallen onto the highway and into the nearby water.

State Route 112 connects the communities of Neah Bay, Clallam Bay and Joyce to the rest of the Olympic Peninsula. The highway sits on an active slide zone and presents maintenance challenges every year as landsides and storms regularly close this route.

Our engineering geologists have documented significant slide activity every 10-20 years, beginning in 1954. The topographical and geological challenges along SR 112 require a calculated approach to address ongoing drainage, stability, and debris concerns.

Leading up to the Nov. 15 storm, a month's worth of rain had already fallen in the Olympic Peninsula in less than two weeks. The soil was saturated and the rivers were high.

Then the storm brought another round of heavy rain, coupled with high tides and wind, which hit the peninsula with a vengeance. Communities like Neah Bay and Clallam Bay were cut off from the rest of the state. WSDOT maintenance crews from other areas including Kitsap, Grays Harbor and Mason counties aided in clearing downed trees, dozens of nearby landslides and blocked culverts.

The slide at milepost 15.8 near Clallam Bay was 400-feet-long, damaging a nearby water main and in an  active slide zone. Work to reopen SR 112 at Clallam Bay included removal of the hillside debris, rebuilding a portion of the highway, slope stabilization efforts, drainage and guardrail repairs, erosion control and seeding.

Further east, WSDOT engineering geologists are preparing long-term design solutions to reopen the highway at milepost 32 near Jim Creek. That work is expected to begin late March by emergency contract and take up to 8 weeks to reopen the road. Proposals may include a combination of drilled piles or shifted rows to stabilize the creek in addition to replacing an outdated culvert beneath the highway. Additional drainage and groundwater concerns will also be included in the final recommendation.

This emergency contract was awarded to Scarsella Brothers for $1.3 million.