The US 195 Corridor Crash Analysis report was completed in 2016. However, as a “living study”, work along the corridor that relates to the study continues. More passing lanes have been added, shoulder and centerline rumble strips installed, and a host of educational efforts have been implemented through the Palouse Regional Transportation Planning Organization (RTPO) and Washington State University. Additional information regarding other initiatives since the completion of the report, including those highlighted above, can be found on the Outcomes tab below.

The US 195 Corridor Crash Analysis is a traffic safety study that focuses on: 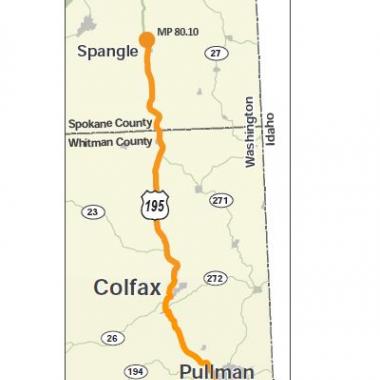 View full image
This map highlights the 80-mile study section between the Washington/Idaho state line (milepost 0) and near the town of Spangle, Washington (Milepost 80.10), about 13 miles south of Interstate 90 and the city of Spokane.

The US 195 Corridor Crash Analysis is a traffic safety study that focuses on serious and fatal crashes and low-cost countermeasures that have the potential to reduce these type of injury crashes. The study aligns with the Washington state Strategic Highway Safety Plan: Target Zero, that addresses the Governor’s initiative to reduce traffic fatalities and serious injuries to zero by the year 2030. This study looked at the corridor traffic safety performance and identified low-cost solutions/countermeasures that have the greatest potential to reduce serious and fatal injury crashes.

US 195 is located in southeastern Washington state. The 80-mile study section includes the area between milepost limits 0.00 and 80.10. This is approximately between the Idaho state line (about 8 miles north of the Lewiston/Clarkston area) and Spangle, Washington (about 13 miles south of I-90 and the city of Spokane).

US 195 is a major regional north/south freight corridor. It connects a significant agricultural area known as the Palouse with I-90. It is a primary route for travelers seeking access to medical services, commercial/retail business centers, the Spokane International Airport, Washington State University (Pullman and Spokane), University of Idaho, and various Spokane and Whitman County communities.

WSDOT’s Eastern Region Planning office conducted the study in collaboration with many partners:

This study included a review of five years (2005 - 2009) of US 195 enforcement data provided by the Washington State Patrol. The data includes information regarding location, infraction type, and driver age and gender.

To gain insight into the needs of the communities that rely on US 195, listening posts and a survey were the two tools utilized for this study. The listening posts were held at local gathering places and the survey was distributed online and via paper copies.

We asked the public about what concerns they have when travelling the study corridor, such as how they view other drivers’ behavior, what behaviors they engage in while driving, how they rank crash reduction strategies by importance, their awareness of existing highway safety programs, and anything else they thought was important for us to know.

January 2010 - January 2016
The study completion in January of 2016 made possible the improvement of the passing lane in the corridor study area.

The study was funded by the Washington State Department of Transportation.

Feedback from a public survey, listening posts and study partners provided the following:

Frequent passing by others ranked first in the survey as a public concern regarding the other drivers' behavior. Frequent passing was followed by concerns regarding distracted, aggressive, and speeding drivers.

During the five-year study period (2005-2009), there were 16 fatal and 23 serious injury crashes recorded that overall resulted in 17 fatalities and 40 serious injuries within the 80-mile study section. The data show that:

No one entity alone is able to meet the challenge of reducing the crash frequency or injury severity along the US 195 corridor.

Reducing crash potential along the corridor will require effort by drivers along with the partnership of various organizations. As indicated in the study findings, crashes along the corridor are typically the result of driver, roadway, vehicle and/or other factors that are beyond control of any one agency.

Limited funding is a major challenge that many agencies share. For WSDOT the US 195 study section currently has limited funding opportunities. State law requires WSDOT to prioritize safety projects based on statewide needs where the greatest benefit can be realized for the dollars spent.

The US 195 study segment does not prioritize in regards to deficiencies and needs when compared to other state roads and is unlikely to readily prioritize for engineering safety funding in the near future. As engineering countermeasures are implemented on higher priority routes, this segment may move up on the priority list.

This analysis shows that the study segment already incorporates many of the identified countermeasures and the operation and safety performance is consistent with the modeled expectation.

Findings indicated crashes along the corridor were attributed more to driver behavior than roadway design. However, to find solutions that worked for both behavior and design, the four E’s (enforcement, engineering, emergency medical services, and education) of the Washington State Strategic Highway Safety Plan – Target Zero became part of the evaluation process.

A list of study recommendations can be found in the study document. US 195 Corridor Crash Analysis (PDF 11.4Mb)

As a “living study”, the work continues

The Washington Department of Transportation (WSDOT) and our partners are committed to ongoing collaboration towards the reduction of crash occurrences along the US 195 study corridor. Collaboration efforts have continued since the study document was completed in 2016, with the goal of incremental implementation and monitoring of improvements, as well as the modification of driver behaviors. The following is a list of actions that have since been taken to reduce the occurrence of crashes along the US 195 corridor, categorized by each of the four E's from the Washington State Strategic Highway Safety Plan - Target Zero plan: enforcement, engineering, emergency medical services, and education.

Crash pattern and timeline data were shared with the Washington State Patrol (WSP) during the study. WSP noted that state troopers prioritize their crash prevention efforts at locations and times that are consistent with patterns of crash occurrences. However, the breadth of the geographic area where troopers work is influenced by the following:

Some motorists’ driving practices are influenced by the probability of being stopped by a trooper and the potential of receiving a traffic ticket. Trooper visibility on the highways has a positive impact on driver practices.

No known strategies have been implemented at this time.

Washington State University (WSU) Driver Safety Committee
The Palouse RTPO and WSDOT initially started a driver safety public awareness campaign; however, over time they partnered with numerous other agencies including WSP, WSU, City of Pullman, local police and sheriff offices, Washington Traffic Safety Commission, and Whitman County. Partnering with WSU led to the WSU’ Driver Safety Committee, where partners routinely meet to discuss strategies to communicate and improve the driving behavior and safety of students, their families, and community members who travel for school and sports in and out of the Palouse region.

WSDOT deployed variable message sign messages that were collaboratively developed with our partners and placed during major WSU events (such as the VMS Sign on US 195).

The primary goal of these groups is to increase public awareness, driver safety-related education, and weather updates, and to instill safe driving habits for travelers along the US 195 corridor in support of the Washington State Target Zero goals.

In July 2021, the Palouse RTPO and Policy Board determined it could no longer fund the Palouse Driver Safety Campaign, and the program was discontinued at the end of August 2021. However, the web content produced for the campaign will remain available.