Thank you for participating in the online open house that was held January 27 to February 10. Over 800 responses were submitted. Feedback we have received will be taken into consideration as we continue work on developing recommendations and complete the study report.

US 101 connects Sequim, a city in Clallam County, with the rest of western Washington. It is a vital link for residents, businesses and visitors. The pre-design study will identify potential roadway improvements and will focus on safety, access and improving travel times using the Practical Solutions approach. WSDOT is working with Clallam County, the City of Sequim, Clallam Transit System, Jamestown S'Klallam Tribe, and the Sequim-Dungeness Valley Chamber of Commerce. 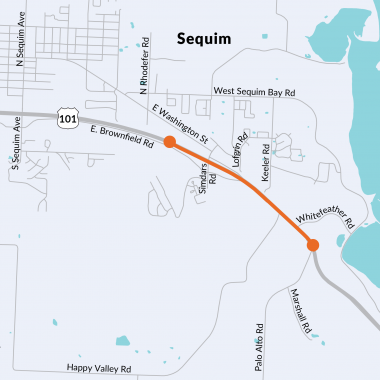 WSDOT is conducting a pre-design study of US 101 in Sequim between the Simdars Road Interchange and Palo Alto Road. As part of the study, a public online open house was held January 27 to February 10 and the summary (PDF 1.3MB) describes the feedback WSDOT received.

Crashes will increase with roundabouts on highways

Drivers won't slow down for roundabouts on US 101

High-speed approaches to roundabouts include advance signing, pavement markings and raised channelization. With proper design, drivers are directed to adjust their speeds, slow on approach, and navigate the roundabout safely.

Why not build a traffic signal instead of a roundabout

Improvements like stop signs and signals, while very familiar, aren't always the safest choice. With intersections representing about one-quarter of annual U.S. traffic fatalities and roughly half of all injury crashes, safer designs are needed that improve mobility while saving lives.

Studies by Kansas State University measured traffic flow at intersections before and after conversion to roundabouts. In each case, installing a roundabout led to a 20% reduction in delays during peak hours. There are many roundabouts currently on Washington State highways with speeds of 50 MPH and greater. These modern roundabout designs account for high-speed approaches by providing longer splitter islands and pavement markings, along with enhanced signing. Some of these roundabouts that currently exist on two-lane high-speed highways include two on SR 3 in Mason and Kitsap counties, SR 12 in Lewis County, SR 510 in Thurston County, and there are 2 located on SR 395 in eastern Washington. There are a number of roundabouts on highways that are being planned for the future.

More information about roundabouts is available on WSDOT’s website.

A published report will recommend short-, mid- and long-term solutions to improve system performance on US 101 within the pre-design study limits. The report will take into account analysis from the study and local community input.