During the 2022 legislative session, the Legislature allocated $4 million for additional analysis and development of an expanded framework for future work, and $150 million to be used as matching funds to leverage federal funding opportunities over the next six years. WSDOT is determining the next phase of work and how it will be undertaken in coordination with a Policy Committee and consultant support. In keeping with legislative direction, that work will include:

A report will be submitted to the Governor and Legislature by June 30, 2023.

Previous reports can be found under the "Outcomes" tab on this page.

WSDOT is studying how ultra-high-speed ground transportation (UHSGT) might serve as a catalyst to transform the Pacific Northwest. A stronger, better connected economic megaregion — stretching from greater Vancouver, British Columbia to metro Seattle, Washington to Portland, Oregon — has the potential to thrive in the global marketplace. A key component of that vision is a fast, frequent, reliable and environmentally responsible transportation system that unites this Cascadia megaregion, and positions it for global competitiveness and future prosperity. 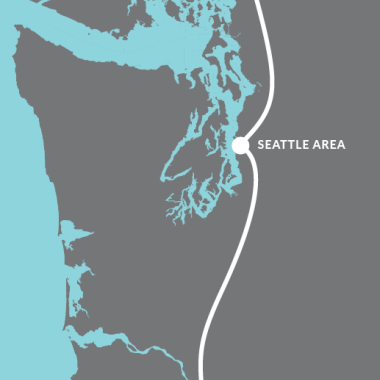 View full image
Map of corridor that might be connected with UHSGT.

The Washington State Governor’s Office and state Legislature asked WSDOT to study ultra-high-speed ground transportation from Vancouver, British Columbia to Portland, Oregon. Regional business and government leaders believe enhanced interconnectivity would allow Cascadia to better manage the megaregion’s population and economic growth potential and maximize public transportation benefits. Such a system is envisioned to be about much more than transportation. It also could result in better access to jobs, affordable housing, shared resources, increased collaboration and economic prosperity.

Megaregions are networks of metropolitan regions with shared economies, infrastructure and natural ecosystems. There are 11 emerging megaregions in the U.S. The rapidly growing economy and population characterizes the Cascadia megaregion, which encompasses Vancouver, BC; Seattle, Washington; and Portland, Oregon.

In general, the evaluation criteria for where high-speed ground transportation can be considered feasible are:

Ultra-high-speed ground transportation (UHSGT) won’t stop everywhere in this corridor. The analysis is evaluating route and station options. UHSGT will benefit the entire Cascadia megaregion, not just people at station stops. It could alleviate traffic and transit congestion while encouraging greater regional collaboration in research, economic development and business innovation.

The Pacific Northwest Rail Corridor (PNWRC) is one of 11 federally-designated high-speed rail corridors in the U.S. The 462-mile (742-kilometer) PNWRC serves the most densely populated areas of the Cascadia megaregion, linking Vancouver, BC to Seattle, Portland and Eugene.

The distances between Portland and Seattle and between Seattle and Vancouver are less than 200 miles (322 km) each, which are short distances for plane trips and longer than necessary for car trips because of congestion. An ultra-high-speed transportation system could offer speeds up to 250 mph (402 km/h), allowing for travel times of less that an hour between each of the cities.

The exiting travel choices in Cascadia include air, rail, automobile and bus service. Below is a distance and time breakdown for all four existing modes between the cities.

This $895,000 study was funded by approximate equal contributions from Washington, Oregon, British Columbia and Microsoft Corp.

The study was funded with $750,000 from the Washington State Legislature and an additional $650,000 from the Province of British Columbia, the Oregon Department of Transportation and Microsoft Corp.

The outcomes of the 2020 UHSGT Framework for the Future report recommends actions in three areas crucial to future decision-making:

This offers guidance to create a coordinating entity to advance the project beyond the initial concept phase and outlines a more formal governing model for the future.

This emphasizes the importance of:

This sets forth potential strategies to secure a variety of funding sources and includes scenarios for possible federal, state or provincial, and private investments that could create a complete funding and financing plan.

2020 Framework for the Future - Executive summary

2020 Framework for the Future - Full report

The outcome of the 2019 Business Case Analysis builds on previous UHSGT studies conducted by WSDOT. It provides a more comprehensive and detailed picture of the wide range of benefits that would flow to the region due to UHSGT.

The 2019 Business Case Analysis builds on previous UHSGT studies conducted by WSDOT. It provides a more comprehensive and detailed picture of the wide range of benefits that could result in the region due to UHSGT. Details on the strategic, economic, environmental and financial case for UHSGT in the Cascadia megaregion are included.

Key findings of this study include: