The Washington State Department of Transportation (WSDOT) NW Region Mount Baker Area is initiating the second phase of the I-5 Skagit Transportation Study.

The Washington State Department of Transportation (WSDOT) NW Region Mount Baker Area is initiating the second phase of the I-5 Skagit Transportation Study. The study is a multi-jurisdiction transportation planning function to address safety and congestion needs identified during the 2021 Existing Baseline Conditions Analysis. The study will examine demographics and social-economic data, and environmental factors and identify and analyze near and mid-term future multimodal transportation strategy alternatives in conjunction with a robust public outreach/ engagement process. 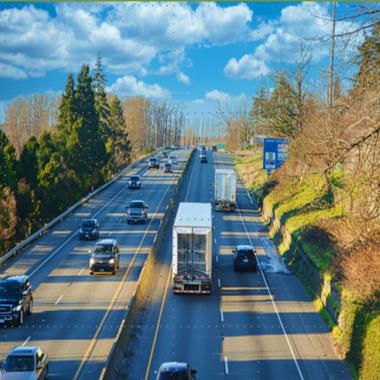 View full image
View from northbound I-5 at 4th Street in Skagit County, a section of I-5 included in the I-5 Skagit Transportation study.

Interstate 5 is the primary north-south transportation corridor in Skagit County and is part of the National Highway System. The study area is in the urban areas of Mount Vernon and Burlington between the Old Highway 99 interchange at exit 223 and the Cook Road Interchange at exit 233. The study area is about 9 miles. The estimated population in the urban area was about 49,500 in 2019-2020 according to the Washington State Office of Financial Management.

I-5 is a four-lane divided interstate and consists primarily of 12-foot driving lanes and an 8-foot shoulder. The posted speed limit varies between 60 miles per hour and 70 miles per hour within the study area. The urban area posted speed limit is  60 miles per hour. There are eight interchanges within the corridor with a total of 30 ramps that provide access on and off the interstate to regional and local destinations. All interchanges are separated by one or more miles. Four interchanges carry traffic to four other state highway routes east and west of I-5. These routes include State Routes 536, 538, 20 and 11.

The Skagit River is a major barrier to access between the two communities of Mount Vernon and Burlington. There are only two north-south bridges across the Skagit River, the I-5 Skagit River Bridge (now formally known as the I-5 Trooper Sean M. O’Connell Jr. Memorial Bridge) and a local bridge known as the Riverside Bridge. The Riverside Bridge is parallel to I-5 and serves as the primary local corridor connecting the commercial areas between the communities of Burlington to the north and Mount Vernon to the south. The Riverside Bridge accommodates all modes of transportation including bicycles, pedestrians and transit.

Bicycles are permitted on a portion of the interstate in Burlington and Mount Vernon but are restricted across the I-5 Skagit River Bridge between the College Way Interchange exit 227 in Mount Vernon and George Hopper Road Interchange at exit 229 in Burlington. Additionally, many local streets in the urban area permit pedestrians, bicycles and other rollers. Skagit Transit is the primary service provider for transit services in Skagit County.

This analysis was funded through state appropriations.