Construction will take place in 2023 and 2024. While the I-5 lanes will shift, we will maintain three lanes on the freeway through the construction zone. Further details will be provided when design is complete. 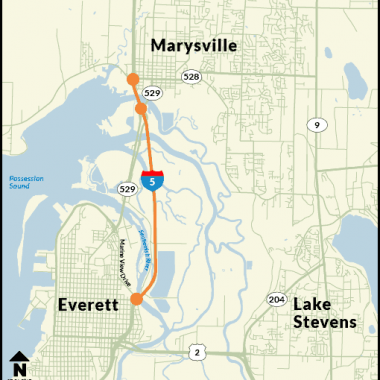 The project will add a roundabout at the I-5/SR 529 interchange, a northbound ramp from I-5 to SR 529 and a ramp from SR 529 to southbound I-5, and a northbound HOV lane between Marine View Drive in Everett and SR 529 in Marysville.

The population of Snohomish County increased by over 400,000 residents between 1980 and 2018. It's expected to gain another 200,000 residents by 2035. This explosive growth increased the number of vehicles using I-5 between Everett and Marysville, with around 65,000 vehicles traveling in the northbound direction alone each day. Drivers frequently experience heavy congestion and long commute times. In addition, traffic at the I-5/SR 528 interchange in Marysville often backs up, creating additional delays.

WSDOT formed a Stakeholder Advisory Group (SAG) made up of representatives from area cities, agencies and tribes to make recommendations on how to reduce congestion. In August 2019, with feedback from the SAG, WSDOT selected a preferred alternative. WSDOT will build a permanent fourth lane for HOVs, extending the existing HOV lane in Everett to SR 529. The three general-purpose lanes will remain in place. WSDOT chose this alternative after studying data that shows a high percentage of HOV-eligible vehicles regularly travel through the area.  In addition, WSDOT is looking into how the improved interchange can serve people who bike and walk on SR 529 between Marysville and Everett.

The benefits of a new HOV lane and an improved interchange include:

Check the contract ad and award information for this project.