The Ripley Lane Stream Connection Project is part of a series of fish barrier corrections planned by WSDOT for the I-405/SR 167 corridor. The Ripley Lane Stream Connection Project will construct new stream channels by combining two culverts into one open channel. We determined that the proposed concept would restore full fish access to Lake Washington for both streams and improve nearshore habitat. The project will also provide the necessary water flow capacity downstream to allow removal of the flow restrictor installed during the Renton to Bellevue Project. This proposed concept will also avoid displacing people from their homes, will minimize property acquisitions and will reduce long-term maintenance concerns.

Timeline
The project is currently in the design and environmental stages. We anticipate construction will be complete by 2025.
Project status
Pre-construction
Funding
Approximately $10 million
Project hotline
425-456-8585 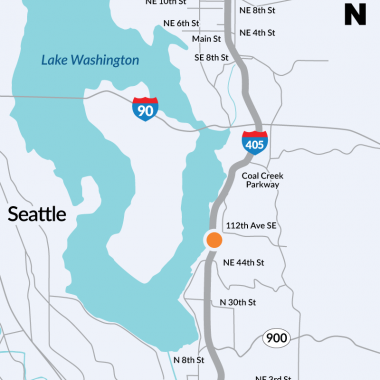 The Ripley Lane Stream Connection Project area is near the northern border of the City of Renton, less than half a mile north of the I-405/Northeast 44th Street interchange.

There are two culverts carrying fish-bearing streams under Interstate 405 in the vicinity of Ripley Lane that have been identified as fish barriers. In addition, these two existing culverts have known maintenance issues and need to be replaced because they are at the end of their useful life. These two tributaries of Lake Washington are located near the northern border of the City of Renton, less than half a mile north of the I-405/Northeast 44th Street interchange.

The work to be completed in this project, combined with that being completed in the Renton to Bellevue project, is part of the 2013 U.S. District Court ruling requiring the state to remove fish barriers. WSDOT is addressing downstream constrictions to allow the free passage of fish as required by the court. The current stream outfalls into Lake Washington between two houses on Ripley Lane in Renton. WSDOT is working to determine the location and design for this new stream connection.

The Court has ruled that the State of Washington has built and currently operates stream culverts that block fish passage to and from the tribes' usual and accustomed fishing places, depriving the tribes of the fishing rights reserved in the treaties.

The project is currently in the design and environmental stages. We anticipates construction will be complete by 2025. A more detailed schedule for this project is yet to be determined.

The project is funded with Connecting Washington funds.

The proposed stream connection design concept we are pursuing for the project will address downstream capacity needs and result in fully restored connections of Stream 7.7A and 7.8 to Lake Washington.

We evaluated multiple other design concepts prior to selecting the proposed concept shown above.

The I-405 Renton to Bellevue Widening and Express Toll Lanes Project is one project that makes up the I-405/SR 167 Corridor Program, along with more than 150 unique, coordinated projects.

The Renton to Bellevue project is designed to reduce congestion and improve safety performance along one of the state’s most congested sections of highway. The project will add new capacity to create a two-lane express toll lanes system between SR 167 in Renton and Northeast Sixth Street in Bellevue.

WSDOT has been working for many years to remove fish passage barriers. Twenty-one northwest Washington tribes asked the U.S. District Court to find that the State of Washington has a treaty-based duty to preserve fish runs, and sought to compel the state to repair or replace culverts that impede salmon migration. The work to be completed in this project, combined with that being completed in the Renton to Bellevue project, is part of the 2013 U.S. District Court ruling requiring the state to remove fish barriers.