Following the State Route 532 corridor sketch in 2017, several strategies and actions were outlined to keep the corridor working well and to address performance gaps including, but not limited to, further evaluation. This baseline analysis is intended to provide further evaluation before the implementation of any strategy. WSDOT, in partnership with several stakeholders including the City of Stanwood, Island County, Snohomish County, Island Transit, Community Transit and Island Regional Transportation Organization (IRTPO), is conducting an existing conditions analysis of the State Route 532 corridor between Terry’s Corner (MP 0.0) and Interstate 5 (MP 10.08).

WSDOT is conducting a survey: SR 532: Snohomish County, Stanwood and Camano Island. Copy and paste this link into your browser to participate: https://www.surveymonkey.com/r/HPPKGTS.

State Route 532 is the primary east-west corridor to Interstate 5 for the city of Stanwood, Camano Island and unincorporated areas of Snohomish County. Over the last several years, this area has experienced increased levels of vehicular and commercial truck traffic during peak travel periods. In addition, the Island Regional Transportation Planning Organization (IRTPO) and the city of Stanwood identified congestion as a major transportation and economic development concern in the region. To address these concerns, WSDOT Northwest Region Mount Baker Area is working with the city of Stanwood, IRTPO, Island County, Snohomish County, Island Transit and Community Transit to conduct a technical baseline analysis of SR 532 to determine if the corridor is meeting regional transportation performance expectations. 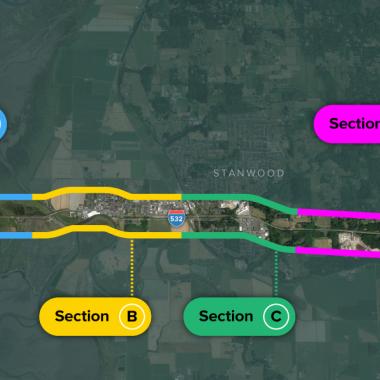 In 2017, WSDOT conducted a statewide study of state highway corridors to determine how well state highways were operating and found that State Route 532 may warrant additional review to determine if the facility is meeting regional performance objectives. This statewide study effort became known as the Corridor Sketch Initiative (CSI). CSI was a new approach to evaluating state highway facilities and their role in a connected, multimodal transportation system with partnering agencies. The approach looked at mobility, safety, preservation and environmental issues. A key focus of this effort was engagement with local and state multimodal, multidisciplinary agencies to evaluate system performance, identify challenges and develop complementary cost-effective strategies.

This corridor is 10 miles long with two primary east-west travel lanes with shoulders. Some truck climbing lanes are present on the corridor. The corridor extends from Terry’s Corner on Camano Island through the city of Stanwood to Interstate 5. Island Transit primarily serves the Camano Island community, while community Transit primarily services Snohomish County and the Stanwood community. There are three park and ride lots on this corridor located at Terry’s Corner, in Stanwood and at the interchange of SR 532 and I-5.

This analysis is funded through state appropriations in the amount of $80,000.