The pre-design study will examine the intersection of SR 105 and West Harriman Street in Aberdeen to replace the existing traffic signal.

The pre-design study looked at the signalized intersection on SR 105, South Boone Street, at West Harriman Street. The aging traffic signal at this intersection was last replaced in 1982 and is in need of replacement. The pre-design study will conduct stakeholder and public outreach to examine replacing the traffic signal with a compact roundabout. 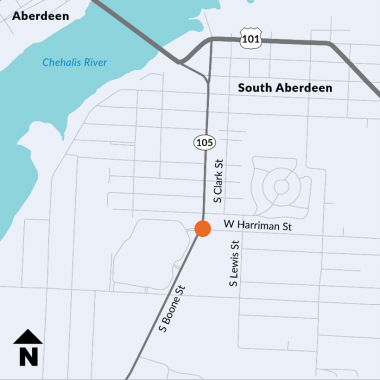 The current traffic signal was installed in 1982 after the opening of the South Shore Mall. This aging traffic signal requires regular maintenance to keep it operational. The traffic signals are suspended over the intersection on wire instead of modern signal mast arms.

The nearly 40-year-old traffic signal system at this intersection prompted an in-depth review and the pre-design study. The review analyzed traffic patterns, the number of travelers that use the area, collision history, and pedestrian accessibility. Following the analysis, engineers are proposing that a single-lane roundabout is the recommended traffic control for this intersection. Some common questions [PDF160 KB] about roundabouts typically are asked during planning studies involving intersections.

The pre-design study began in January 2021 and will take approximately 6 months to complete. Once the study is complete, the project design and construction work will begin.

This project is funded through WSDOT’s Preservation Program. Preservation funded projects: have a shorter timeline than the more expanded corridor improvement projects; the purpose of the project is to make the intersections function more efficient and lessen the amount of time and cost to maintain them; and they have a limited amount of funding. The funds are only allocated for specific work and it doesn’t allow for additional work outside of the project scope.

The existing traffic signal system at the intersection of SR 105, South Boone Street, and West Harriman Street in Aberdeen, near the Shoppes at Riverside, has reached the end of its useful life. This aging traffic signal installed in 1982 requires regular maintenance to keep it operational. The traffic signals are suspended over the intersection on wire instead of modern signal mast arms. WSDOT has proposed replacing the outdated traffic signal at this location with a modern roundabout for improved mobility, reduced potential for collisions, and reduced maintenance costs to taxpayers. WSDOT’s roundabout project compliments the City’s Grays Harbor Neighborhood Connection project by reducing vehicle speeds and conflict points.

The enhancement is built to serve the travelers that already use it. The roundabout will accommodate vehicles of various sizes, including emergency vehicles, buses, bicycles, semi-trucks with trailers, and farm and logging equipment, while improving pedestrian access. The roundabout’s center island is fully mountable by larger vehicles. This design feature means that freight haulers and oversized loads can navigate the intersection effectively.