WSDOT will replace the US 101 Elwha River Bridge in Port Angeles after serving the community for nearly a century. Replacing the bridge will ensure that the US 101 route continues to be a reliable transportation facility for decades to come.

The new bridge will be 40 feet wide and accommodate two 12-foot lanes with two-8 foot shoulders (the current bridge is 28 feet wide). A wider bridge will create a more comfortable crossing for travelers and provide adequate shoulder room for bicyclists and pedestrians. Additionally, the new alignment with US 101/Olympic Hot Springs Road will have a more gentle curvature, with a higher design speed (35 mph) at the east end of the bridge.

During construction, most of the work will take place "offline" or away from the existing crossing. Expect temporary reduced speed limits, shifted lanes or heavy equipment near the site.

Towards the end of bridge construction, US 101 will need to close for one week to allow crews to complete the tie ends and final paving. During this brief closure, travelers will detour using State Route 112 and SR 113. 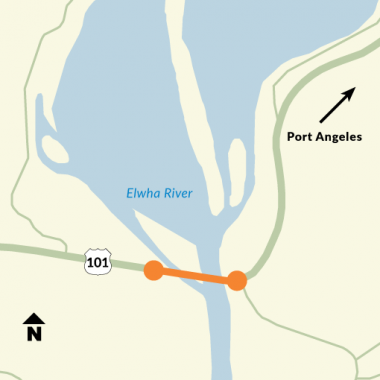 The US 101 Elwha River Bridge sits at the heart of the Olympic Peninsula, and is a major lifeline for travelers between Forks and Port Angeles.

Built in 1926, the 3-span, 388-foot concrete arch bridge has served the community for more nearly 100 years. Over the last several years, the Elwha River has dramatically changed its course and flow, leading to significant erosion around the bridge foundations. As a result, WSDOT estimates the riverbed around the bridge’s piers has lowered 14 feet.

The lowered riverbed revealed the piers’ seals, prompting WSDOT to do borings to verify the depth of the foundations. The borings, done in October 2016, revealed the foundations are on gravel, not bedrock. This finding was in contrast to what the original 1926 engineering plans showed.  As a result, WSDOT immediately installed almost 5,000 tons of riprap (large boulders) around both piers to help prevent further erosion. Additional bridge monitoring using tilt meters, crack meters, water flow meters, surveys and visual observations are underway until the bridge can be replaced.

WSDOT remains committed in continuing to work with local and regulatory partners in this project including Federal Highway Administration, Department of Interior, Olympic National Park, Department of Archaeology and Historic Preservation, Lower Elwha Klallam Tribe, Department of Ecology, Department of Fish and Wildlife, Corps of Engineers and area jurisdictions.

The Federal Highway Administration and Olympic National Park issued a joint Finding of No Significant Impact (FONSI) and Errata for US 101 Elwha River Bridge Replacement on November 22, 2021.

WSDOT and the Federal Highway Administration published the Environmental Assessment (EA) for the US 101 Elwha River Bridge Replacement Project on July 19, 2021. The comment period ended on August 18, 2021.

Learn how the bridge changed course and flow over the years, and what construction may look like in this video.

WSDOT is replacing an outdated culvert at Indian Creek, west of the Elwha River Bridge. Travelers should plan ahead and expect brief delays.