WSDOT plans to close SR 106 at Twanoh State Park for up to 20 days after the 4th of July 2023. The total closure will start as early as July 9 and be completed no later than July 31.

The highway will be closed in both directions to all traffic around-the-clock. A signed detour will be provided.

Travelers will also see around the clock one-way alternating traffic before and after the closure.

The total closure will minimize the construction footprint. It will also reduce the overall timeline of construction. 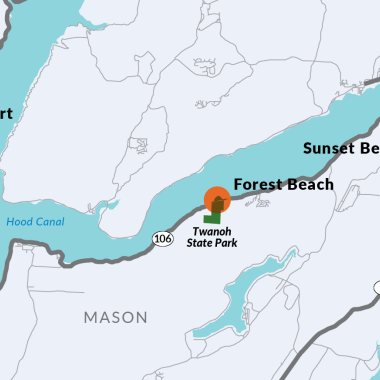 State highways cross streams and rivers in thousands of places in Washington. Crossings can impede fish migration. Many culverts were built decades before the needs for fish were fully known.

WSDOT now builds much improved structures. They provide for fish passage. WSDOT often replaces outdated culverts with a new bridge or other fish passable structures. Both help increase the likelihood of migration. Fish are able to pass through creeks more easily as water is slower. Crews also restore creeks to create a more natural environment.

There are no related maps or drawings.

WSDOT has a comprehensive program to remove barriers to fish under state highways.