Crews will upgrade and replace key elements of the SR 104 Hood Canal Bridge. The construction bolsters systems that guide the bridge together and keep both halves of the bridge connected.

During summer or early fall 2023, travelers can expect up to four total weekend closures of the SR 104 Hood Canal Bridge.

While not yet scheduled, the weekend closures will extend from 11 p.m. Friday to 4 a.m. Monday. Crews will also require a series of night intermittent closures to all travelers.

WSDOT will announce all closures when they are scheduled.

The work will not affect marine traffic passing through the bridge. Hood Canal Bridge information is also available via push notifications on the WSDOT app. 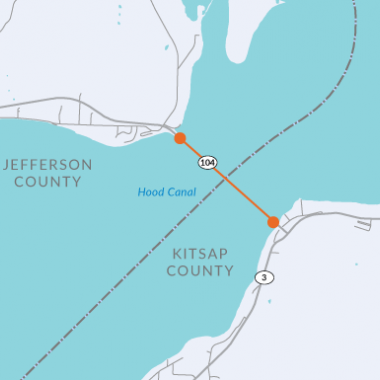 A key element of this bridge helps keep both halves of the bridge together. The area, called a center lock, is similar to a door’s deadbolt. During this project, crews will bolster the center lock to better withstand tremendous forces, especially during powerful winter storms and fast-moving tides.

During winter 2020, WSDOT maintenance crews made temporary repairs to the mechanisms. That phase of work was completed by contractor crews during during winter 2021.

Over four weekends between spring and fall 2023, contractor crews working for WSDOT will make permanent repairs to the pyramids. The pyramids help guide the draw span together when both halves of the bridge are connected.

Repairs will extend the ability for the bridge to open for marine traffic and close the draw span for all travelers crossing the SR 104 Hood Canal Bridge. With no convenient alternate routes between Kitsap and Jefferson, repairing the bridge preserves an important lifeline for residents and businesses.

There are currently no maps or drawings for this project.

Federal law requires the bridge to close to traffic for mariner passage.