The Stillaguamish River Bridge was in need of new paint to preserve and protect its aging structure. Existing paint on the southbound I-5 bridge was weathered and damaged, allowing corrosion to occur. This bridge preservation project removed old peeling paint, cleaned exposed metal and applied new paint to the existing bridge structure on southbound I-5 under a full containment system. Minor maintenance and repairs were also performed such as replacing joints and rivets.

While the painting of the bridge was finalized in 2021, contractor crews working on behalf of the Washington State Department of Transportation are working on completing the remaining items of this project that require warm, dry weather during the summer of 2022. Shoulder and single lane closures should be expected through the end of June.

The southbound bridge was closed and under full containment for the duration of this project. All southbound traffic was diverted onto the existing median bypass on the adjacent northbound bridge beginning in June through mid-October 2021.

This reduced northbound and southbound traffic from three lanes down to two lanes in each direction. Travelers experienced increased congestion and back-ups during peak commute hours. Speed limits were reduced from 70 mph to 50 mph through the work zone. 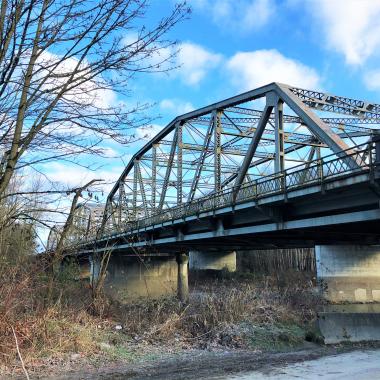 Originally built in 1933, the southbound I-5 Stillaguamish River bridge is weathered and damaged, allowing corrosion to occur.

The southbound Stillaguamish River bridge was built in 1933 to carry US 99. The steel truss bridge comprises three spans over the river and spans 607 feet. When I-5 opened in the 1960s, the bridge became part of the interstate, carrying two lanes in each direction. A new northbound bridge opened in 1971 and traffic was separated resulting in three lanes on each bridge.

Each span of the bridge carries an average of 39,000 vehicles per day, but that can rise to 50,000 per day during summer. The heaviest traffic volume occurs between 3 p.m. to 6 p.m. Thursdays and Fridays and from 11 a.m. to 4 p.m. on the weekends northbound, and from 4 p.m. to 6 p.m. on Sundays southbound.

In the summer of 2014, WSDOT contractor crews replaced the southbound bridge deck which was worn out after 81 years of use that caused cracks, ruts and potholes. It took about four months to complete the work and the bridge reopened in November 2014.

Federal funds will be used for this preservation project totaling approximately $2.6M.

This map shows the location of the I-5 Stillaguamish River Bridge. This bridge preservation project removed old peeling paint, cleaned exposed metal and applied new paint to the existing bridge structure on southbound I-5 under a full containment system.

Beginning in June, all southbound traffic was diverted onto the existing median bypass on the adjacent northbound bridge through mid-October. This kept both directions of I-5 flowing during the work.