Washington State Ferries is replacing the aging and seismically vulnerable Colman Dock in Seattle in order to maintain its critical role as a regional multimodal transportation hub.

Key project elements included these new elements: concrete and steel trestle, main terminal building, entry building (with retail space), elevated walkway between the terminal building and the passenger-only ferry and replacing the overhead passenger walkway on the northernmost slip (slip #3). It also adds a bicycle entry and holding area north of Marion Street plus stairs and elevators to connect the facility to Alaskan Way. It also mitigates for additional overwater coverage.

Crews are putting the finishing shine on the inside of the new terminal building at Colman Dock. Construction began in 2017, and one-third of building opened in 2019. The final portion of the terminal building will open this summer. We also removed an old bulkhead from the water north of Colman Dock, opening up 180 feet of shoreline along Alaskan Way.

Work continues on the entry building along Alaskan Way and the elevated pedestrian connector that links it to the terminal building. Both of these will open in 2023. Ferry operations will be maintained throughout construction, but customers can expect changes to how vehicles, passengers and bicycles load and unload.

The Marion Street vehicle and bicycle exit reopened in May. It was closed in October 2020 to build the new concrete trestle and for the Seattle Department of Transportation (SDOT) to repave Alaskan Way and build new sidewalks. Reopening this improves loading and offloading times for both our Bremerton and Bainbridge vessels. See the Maps & Drawings tab below for a map of the exit route. 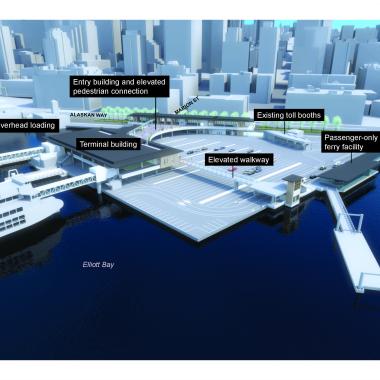 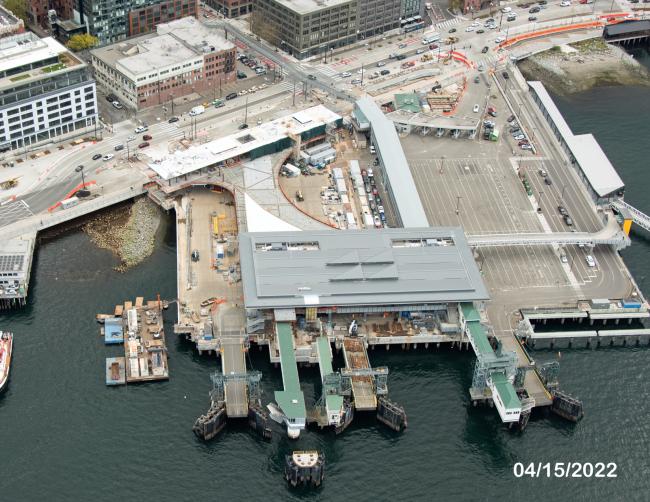 Washington State Ferries is replacing the aging and seismically vulnerable Colman Dock in Seattle to maintain its critical role as a regional multimodal transportation hub.

What to expect in the new, partially completed terminal building

The new passenger terminal building is partially open, providing passenger access to the Bremerton and Bainbridge Island ferries. The terminal building construction was phased in order to maintain full operation for both Bremerton and Bainbridge Island routes. Until the rest of the terminal is open in 2022, we are operating in just one third of the building and have fewer amenities than the full facility will have. Passengers should plan to arrive about 10 minutes before departure to avoid standing in line for long periods of time.

We selected Hoffman-Pacific, a Joint Venture, as the General Contractor/Construction Manager in fall 2015 and they have committed to maximizing opportunities for DBE firms. WSDOT has established a DBE goal of 9% of the project’s Maximum Allowable Construction Cost (MACC).

With $467 million in secured funding, we will replace the seismically-vulnerable elements of the facility to preserve Colman Dock’s core functions. This budget also funds the new terminal, an entry building, pedestrian plaza and bicycle facility. 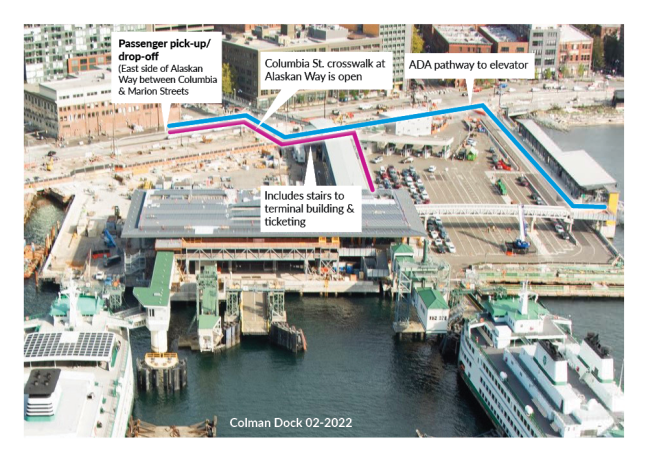 More photos, videos, and maps are available on our project Flickr page.

For questions about DBE opportunities on this project

For information about certification and WSDOT’s DBE supportive services: