To keep people and goods moving through Washington State, this project will focus on reducing congestion and improving safety on the I-5 corridor between the Chamber Way interchange and the State Route 6 interchange in Lewis County. Subject to cost savings provided by practical design solutions within the project budget, this project will also seek to reduce congestion and improve safety on Interstate 5 between the Chamber Way and the Mellen Street interchanges.

This project is still in the early design phase. Next steps include developing solutions and alternative assessments which we expect will result in identifying Interstate System improvements.

Well ahead of construction, traffic impacts and road closures will be communicated out to the traveling public so they can plan ahead and avoid possible delays. 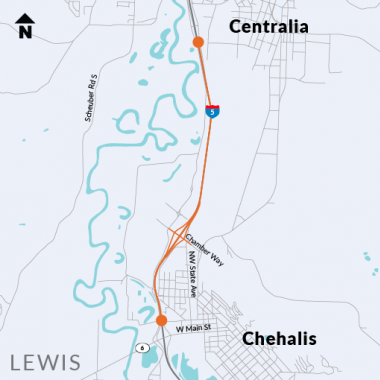 This project will focus on reducing congestion and improving safety along the I-5 corridor between Chamber Way and the State Route 6 and Mellen Street interchanges, in Lewis County.

Interstate 5 or I-5, serves as the primary connecting highway on the west coast, running parallel to the Pacific Coast through California, Oregon and Washington, and is the only highway in the nation to touch both the Canadian and Mexico borders.

Due to an increase in congestion during weekday peak commute times (typically between 4-6 p.m. on weekdays and between 12-2 p.m. on Fridays) and in an effort to improve safety and trip reliability, the Washington State Department of Transportation is looking at ways to improve mobility along I-5 between Chamber Way and the SR 6 and Mellen Street interchanges, in Chehalis. Once this project is complete, travelers will experience less congestion, reduced travel times and an increase in travel time reliability and safety.

The I-5 Chamber Way - Stage 2 project spans multiple local jurisdictions in Lewis County between the cities of Chehalis and Centralia.​

The general study limits may include the following:

This project will look at ways to improve safety throughout this corridor.

This project will look at improvements to address the mobility along the corridor, including freight, general highway traffic, local traffic, transit and for pedestrians.

This is a Connecting Washington funding package with $83 million in available construction and right of way funding assigned to this project. To make the most of the available funds and implement improvements as quickly as possible, we’ll construct these improvements in phases.

See the changes coming during phase one of this multi-phased project.