The Mukilteo/Clinton ferry route is part of State Route 525, the major transportation corridor connecting Whidbey Island to the Seattle-Everett metropolitan area. It is one of the state's busiest routes, with more than 4 million total riders every year. By 2040, walk-on ridership during the peak afternoon commute is expected to increase 124 percent (2010-2040).

The new Mukilteo terminal opened in December 2020. The overhead passenger walkway opened in April 2021 and the Port of Everett's fishing pier, built as part of the ferry terminal project, opened in June 2021. The award-winning ferry terminal is built to LEED Gold standards and honors the tribal history of the site. 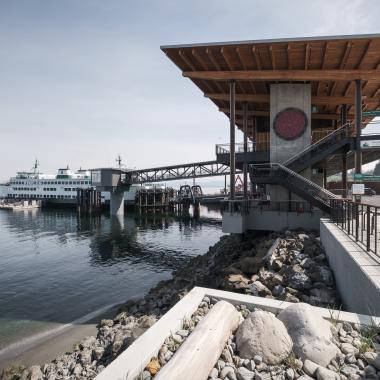 The old Mukilteo ferry terminal, built in the 1950s, didn't meet today's traffic needs nor current seismic standards. The new terminal, one-third of a mile east, improves safety by meeting current seismic standards as it improves transit connections and passenger safety. It also opens Mukilteo waterfront up to residents and is a key part of the city's waterfront master plan.

When Washington State Ferries set out to build a new terminal on the Mukilteo waterfront, we gathered input from several groups, one was the local tribes who fished the waters and thrived on those shores long before European settlers arrived. The site of new terminal, one third of a mile east, is historically significant to local tribes and is the place where the U.S. Government and local tribes signed the Point Elliott Treaty in 1855.

The City of Mukilteo and residents asked that the new terminal be green, Washington State required it be LEED-certified, local tribes asked for it to be “light on the earth.” These three requests melded perfectly in a passenger building designed in the form of a Coast Salish longhouse built to LEED-Gold standards.

WSF, WSDOT, engineers, architects, and construction crews turned the site that most recently housed a U.S. Air Force fueling station, abandoned after the Cold War, into a modern ferry terminal that honors the historical significance of the place. The first phase of construction removed an old 1,360-foot fueling pier that sat on 3,900 creosote-treated timber pilings. Removing the pier took with it 7,000 toxic tons of debris from Puget Sound.

$187.3 million dollars in federal and state funding was appropriated for this project.