This project is complete and there will not be any more related construction. 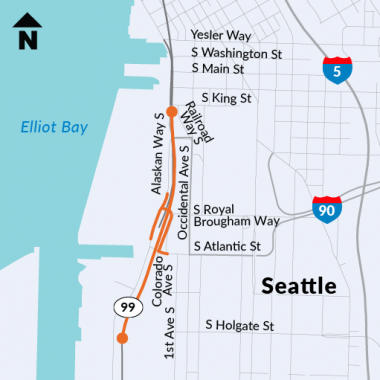 The Alaskan Way Viaduct ran along Seattle's waterfront, between the Port of Seattle and Seattle's SODO neighborhood.

One of the first big projects of the Alaskan Way Viaduct Replacement Program was building a new roadway to replace the viaduct’s southern mile, which ran along the waterfront south of Seattle’s stadiums. The foundations of this section of viaduct rested in soil at high risk of liquefying in an earthquake and were not deep enough reach into solid ground.

This section of State Route 99 was replaced with two side-by-side bridges. These bridges provide much better seismic stability, with foundations reaching up to 260 feet deep. Wider shoulders provide more space for traffic incident and emergency responses. Bridge construction was completed in September 2012, one year ahead of schedule.

This project also built a new overpass above the BNSF railroad tracks near Alaskan Way South and South Atlantic Street. This overpass improves traffic flow to and from one of the Port of Seattle’s busiest terminals, and eliminates severe backups caused by the at-grade railroad crossing. The overpass opened in January 2014.

Demolition of the viaduct's southern mile began in fall 2011 and the final major element of the project—the H-shaped overpass at South Atlantic Street—opened in January 2014.

The SR 99 South Holgate Street to South King Street project was part of the Alaskan Way Viaduct Replacement Program. This project’s portion of the budget was $347.7 million. Funding came from state, federal and local sources.