Find information about the Keller Ferry, a service connecting State Route 21 on the Columbia River between Lincoln and Ferry Counties.

The Keller Ferry, M/V Sanpoil, is a ferry service connecting State Route 21 on the Columbia River between Lincoln and Ferry Counties. Hours of Operation are 6:00 a.m. to Midnight, seven days per week. Ferry service is "on-demand" avoiding unnecessary empty runs. The ferry crew can observe both landings and remain at the north or south landing until a vehicle appears needing to cross in either direction. The last run is at 11:30 p.m. There is no cost to use the Keller Ferry.

The M/V Sanpoil, also known as the Keller Ferry, is 116 feet in length with a 45-foot beam. The capacity of the vessel is 20 cars with a maximum of 149 passengers and two crew members. The vessel can carry a legally-loaded truck and trailer combination up to 105,500 lbs. The maximum vehicle length is 100 ft. Any loads that exceed these weight and length limits should call the WSDOT Davenport office in advance at 509-324-6583 Monday through Friday 6 a.m. to 4:30 p.m. 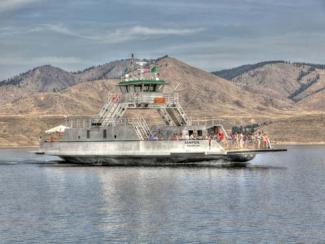 A photo of the Keller Ferry, M/V Sanpoil, on its
maiden voyage.

Approximately 60,000 vehicles travel on the Keller Ferry each year. Walk-on passengers are few as the ferry route is a link in a rural highway, State Route 21. The nearest communities are Wilbur, 14 miles to the south, and Republic, 53 miles north. The free ferry operates seven days a week, 18 hours a day, from 6:00 a.m. until midnight.

The ferry can operate normally with lake levels as low as 1,208 feet.

During normal lake elevation of 1,290 feet above sea level to approximately 1,248 feet, ferry service is "on-demand" avoiding unnecessary empty runs. Occasionally — perhaps every two or three years, when lake elevations drop below 1,248 feet — the north landing is moved a short distance up the Sanpoil River, extending the normal 10 minute crossing to about 20 minutes.

Water levels on the lake are controlled by the Bureau of Reclamation and are affected by snowpack, weather patterns and power generation needs, and are not easily predictable on a long-term basis. This was especially true in 2001, with record low snow levels and unusually high electricity demand.

While water levels are not expected to fall below the 1,208 elevation, it is difficult to predict the actual river conditions in advance.

To assist in travel planning, daily water level elevations are available from the Bureau of Reclamation at 1-800-824-4916. If water levels fall to 1,208 feet, Keller Ferry operation information will be noted on the WSDOT/Eastern Region weekly construction update and travel advisory page.

The Keller Ferry crew consists of eight people. Ferry operators are licensed by the United States Coast Guard after being tested to operate this specific class of vessel. Keller Ferry operations are under the jurisdiction of the WSDOT, Eastern Region, Maintenance Area 3 in Davenport.

When ferry boats in the Pacific Northwest are mentioned, the typical image is that of the giant super ferries that ply the waters of Puget Sound. Most Washington state residents are surprised to find out that we also operates a ferry system in Eastern Washington.

In fact, our involvement with ferry boats began on the "dry side" long before it ventured into the cross-sound routes in Western Washington that are familiar to so many. On September 1, 1930, the State of Washington Department of Highways took over control of the Keller Ferry run on the Columbia River, operated by Mr. William Latta, completing a link on what was then known as State Road #4. The State's tenure as a Puget Sound ferry transportation provider did not begin until over 20 years later, with its purchase of the Black Ball Line on June 1, 1951.

The Gifford/Inchelium Ferry upstream from the confluence of the Columbia and Spokane Rivers is operated by the Colville Confederated Tribes.

Take a look a some Keller Ferry history with former Washington State Secretary of State, Ralph Munro in this YouTube video clip.