The Deception Pass Bridge and Canoe Pass Bridge connect Whidbey Island to the rest of Washington state via State Route 20. These bridges provide the only land access on and off the island. Crews last gave these bridges a fresh coat of paint more than 20 years ago. The years of wind, sun and saltwater exposure have worn down paint and corroded some areas of the bridges. This project will repair those damaged areas and preserve the integrity of these historic structures for the 18,000 people who drive over them each day and the thousands who visit the area each year.

People who travel over the bridge may hardly notice this project is happening. Most of the work will take place under the structure where crews will work in small areas at a time. Travelers can expect weekly overnight lane closures on Thursdays beginning at 8 p.m and last until Fridays at 6 a.m. Drivers will be directed through a single alternating lane of traffic during these scheduled closures.

Deception Pass State Park  and all business will remain open, but drivers should plan for limited parking along SR 20. One sidewalk will remain open during construction so visitors can travel over the bridge without a vehicle. People walking along SR 20 or visiting Deception Pass State Park will hear loud noise during the day and some at night, as crews work to remove old paint from the bridges. 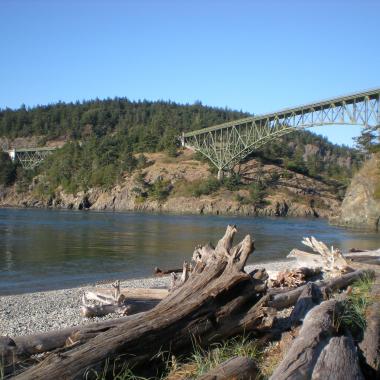 The iconic bridges along State Route 20 make up part of Deception Pass State Park, the most visited state park in Washington.

Canoe Pass Bridge and Deception Pass Bridge are iconic bridges that make up part of Deception Pass State Park, the most visited state park in Washington. In 1900, the idea of a bridge increasingly gained popularity. Captain George Morse, the new Oak Harbor representative to the state legislature, introduced a bill in 1907 appropriating $90,000 toward the building of the bridge. The area was studied and plans were drawn for two steel arches; a model was built and displayed at the  1909 Alaska-Yukon-Pacific Exposition in Seattle. In 1918, the bridge was promoted as a necessary war effort and in 1921, state legislators wrote an appeal to Congress citing its military importance. The American Legion helped form the Deception Pass Bridge Association which encouraged state legislators to pass the 1929 Bridge Bill.

By August 1934, bridge fabricator Puget Construction Company of Seattle built the two-span bridge in less than a year. The bridges opened to drivers and pedestrians in the summer of 1935. The Civilian Conservation Corps helped build the road bed leading to the bridge. Its two sections, a 511-feet structure from Fidalgo Island to Pass Island and a 975-feet structure from Pass Island to Whidbey Island, show how the cantilever truss had evolved into an attractive, functional form. Twenty-eight feet wide, with two auto lanes and two sidewalks, it was built for $482,000 (a combined pool of Emergency Relief Administration, county and other federal funds).

The bridges were listed on the National Register of Historic Places in 1982.

To protect the environment during this work, crews will put a containment system in place as they repair damaged sections, remove paint and then repaint the structure. These containment systems will look like tarps hanging from the bridge but will barely be visible from the highway. This system is to keep paint, dust and other debris from the work out of the water.

​During construction seasons, crews will use many of the upper parking areas along SR 20 for construction equipment. This will limit the available parking along SR 20 for visitors.  All park access in other areas, including Bowman Bay and Cranberry Lake, will remain open. Please visit the Deception Pass State Park website for park information and to plan your visit. Other businesses that operate in this area will also remain open during construction.

​When this project is complete, these bridges will have corroded steel pieces replaced and a new coat of evergreen green paint to help prolong the life of these historic structures.​

SR 20 travels over the Canoe Pass and Deception Pass bridges between Skagit and Island Counties.